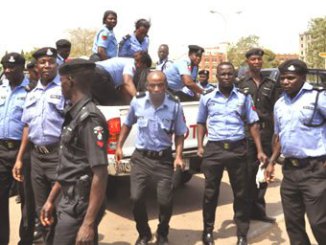 December 3rd, 2016 – Nigerian Police Officer Stabbed To Death By Okada Riders In Agege Lagos During Illegal Raid That Claimed The Live Of A Motorcycle Rider

A Police officer from Kogi simply identified as Sunday was on Monday stabbed to death in Agege Lagos while carrying out an illegal raid that led to the death of a fleeing motorcycle rider.

The police sergeant reportedly chased the Okada man into the mouth of a speeding trailer which eventually knocked him down.

When other Okada men operating in Agege tried to rescue him, they noticed he had died.

They eventually descended on Police sergeant Sunday and beat him to death for allegedly trying to make money off them and for killing one of their colleagues.

His colleagues who fled for their dear lives during the attack later returned when the angry Okada riders left the area.

Officer Sunday was rushed to 4 different hospitals but was rejected. He reportedly died few hours after the attack for lack of medical attention.