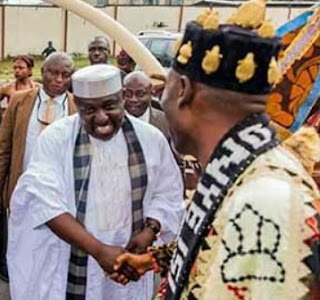 September 16, 2017 – Okorocha Calls For Mazi Nnamdi Kanu’s “Arrest” As He Dissociates The Igbos From IPOB’s Agenda

According to him, IPOB Leader , Nnamdi Kanu should be treated as a single individual because reasonable Igbo people have condemned the group in all ramifications.

The governor who spoke today at the new yam festival in Owerri Imo state dissociated the Igbos from IPOB’s agenda.

“I want to remind all Nigerians that Igbos are the people that fought the last war and if there was anyone so badly affected by that war is the Igbos. After the war, the 1st group of people to run to different ethnic groups and all other tribes for purpose of economic development was the Igbos.

“The Igbos business men have more real estates and more properties and assets outside Igbo land than in Igbo land. So, I want to dissociate Igbos from this very thing that Igbos want to go for secession. A man that wants to go for secession cannot build mansions in Lagos, Kano, Plateau and the rest of the States.

“I think we should single out this act of this young man from the rest of Nigerians. My worry again stands strongly on the fact that today, the issue of IPOB”.