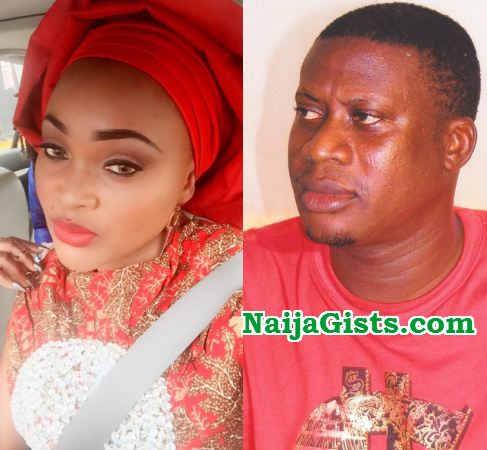 September 28, 2015 – Olaide Olabanji: I Brought Mercy Aigbe Into Nollywood, She Is An Ingrate, I Respect Lola Alao’s Kindness

The Nollywood filmmaker who discovered Mercy Aigbe, Moji Olaiya, Lola Alao and others have expressed his displeasure of the way Mercy Aigbe treated him.

In a recent chat with Encomium, Olaide Olabanji, the CEO of Laiban Film narrated how he brought Lola Alao and Mercy Aigbe into Nollywood and what transpired after.

How did you meet Lola Alao?

I met her through Ayo Mogaji who told me to be featuring her in my films, and I love using new faces, so when I wanted to produce I introduced her and that was how it all started. I discovered Lola Alao, Moji Olaiya, Mercy Aigbe and a guy called Olumide Foluke who now works in a council. He was the one who starred in Final Year, and the films I featured all of them made them noticed in the industry. Moji Olaiya was into soap operas and when I saw her, I felt she can do better in Yoruba movies and that was why I invited her to my location at Dayo Adeaye’s house in Ajegunle, Lagos. It was tough then because Fathia Balogun was also not known but she has been appearing on screen, but this almost generated controversy between the 2 of them. The role was very romantic and I believe she won’t be able to do it better because Saidi Balogun was also at the location and I also won’t do it the way I am supposed to do it because of her husband, so the cast like Clarion Chukwura and Dele Odule supported me and that was how we used Moji Olaiya.

How about Mercy Aigbe?

Mercy on her side was working with a company on the Island and she was living in the same compound with my brother at Gbagada Lagos and fortunately for her, I saw in the compound, this was on Sunday, she was coming from church I walked up to her to know about her because her kids and my brother’s kids played together. I asked her can you act and she said yes but she is working on the island, and 2 weeks after, I brought her to my location at Lekki during the shooting of Sebi Eyan Ni and that was all. It is just that we humans are different.

Did these people show appreciation to you after stardom?

God bless you, I can only vouch for one person who is no other than Lola Alao. If I help you today, I am not expecting you to pay me back because I believe that I must contribute to some one’s life. One thing I appreciate about her is that she doesn’t forget the fact that I made her; she always gives me the credit even when she receive awards. She buys things for me anytime she travels out of the country. Lola bought the shoe I wore on my wedding day in 2005 and this really makes me happy that she remember her source. God just used me for Mercy.

So Mercy Aigbe with all these her social media fashion show off no fit appreciate the man who discovered her? Not too good. #truth be told