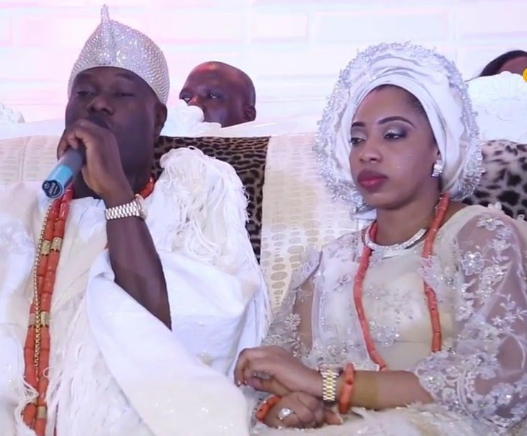 August 31, 2017 – Olori Wuraola Ogunwusi Committed Sacrilege For Working Out Of Her Marriage, It Is A Slap On Yoruba Tradition – Palace Source

New details have emerged on the drama that happened at the House of Oduduwa in Ile Ife shortly before Sonia walked out of her marriage.

A palace source who wrote NG and left a contact number told us today that a lot happened in the course of Sonia’s shortly lived marriage with Ooni of Ife.

The source said even before she was given a 30-day ultimatum to pack her belongings, Sonia had already walked out of the palace.

The source added that Sonia’s exit from the palace was spiritual in that the gods of Ile Ife didn’t chose her to become the Queen.

When Ogunwusi was picked for the throne and the need for an official Queen arose, the king was said to have presented three names —Adediwura Adeyemi, Sonia Obahon and another lady named Wuraola.

The oracle reportedly picked Wuraola, a name the king ended up giving to Sonia who claimed she was pregnant then.

“But he (Ooni) was warned by many not to marry Sonia. She was said to have been married to a Lebanese businessman who was resident in Dubai and had kids. He was adamant and must have allegedly bribed his way with some priests to have the name Wuraola chosen. Even if you bribe human beings, can you bribe the gods? It’s a sacrilege for any woman to walk out of the palace. It’s a slap on tradition. A slap on the throne,” said a source close to the palace.

The source added that a series of ritual needed to be carried out since the monarch had committed sacrilege.