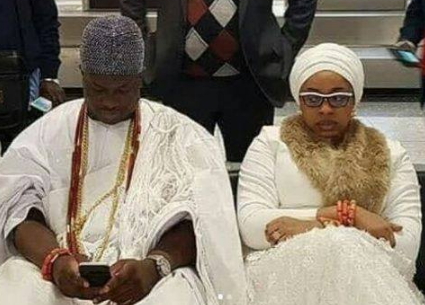 August 28, 2017 – How Olori Wuraola Ogunwusi Moved Out Of Palace When Ooni Married Another Wife & Sent Packing After Prolonged Absence From Palace

Olori Wuraola Was Never Victimised Because She’s Not Yoruba, She Left The Palace After Ooni Married New Wife

Close sources to Wuraola Ogunwusi have revealed their own version of the story that led to Wuraola’s exit from the palace.

Since the news of her marriage crash broke, tongues have been wagging left right and center with many blaming Ooni’s sisters for being the culprits being the crash.

A good friend of Wuraola said the highly controversial socialite who dumped her husband to marry the popular monarch was victimized and forced to move out of Ooni of Ife’s palace because she’s not Yoruba.

However another source close to the couple said her bad attitude and an aggressive effort to isolate the Ooni from the rest of his family members caused her to always be at war with them, which in turn caused them to show her attitude till her marriage crashed.

The source who tongue-lashed Wuraola for claiming that she was victimized because she’s not a Yoruba woman said her bad attitude and her inability to stand the sight of another woman sharing the bed with her husband caused the roof to collapse on her head.

The source said the Olori forced herself out of the Royal union because her jealousy was always causing tension at the palace. Though she was given an orientation before the marriage but she couldn’t stand seeing another woman carry the Ooni of Ife’s child since she couldn’t conceive.

All the above drama continued until she left the palace and travelled to the United States for an extended period of time.

But on returning, she agreed and begged the king to go on with his plan to marry another wife but because she had left a bad legacy at the palace, the Ooni gave her 30 days ultimatum to pack all her belongings and move out of the House of Oduduwa.

When the Ooni told her to leave the palace, she reportedly ran to Obasanjo to talk sense into the monarch but all her efforts failed as the Ooni had already made up his mind during her prolonged absence at the palace.

As we speak, she has relocated to her place in Abuja.