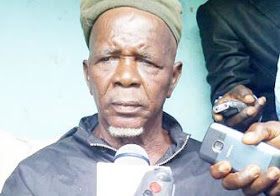 The leader of the dreaded cult group named Ombatse that killed over 50 people in Obi town, Nasarawa state few days ago is dead.

According to the latest information coming from the Nigerian Army, the unnamed leader of the group was killed today while 3 other members were arrested and whisked away from Obi town for further investigation.

He told reporters this afternoon that 3 people were killed in a gun battle with the army and 4 people who sustained serious injuries have been taken to Dahaltu Specialist Hospital (DASH) and responding to treatment.

According to sources, some key  members of the warring Alago tribe and Eggon have also been arrested and brought to the Police Headquarters.

An  ethnic clash had occurred  between Eggon youths reportedly linked to the Ombaste cult group and Alago people of Obi local government all of Nasarawa state.

Stay in touch as this story develops.

Coping With Disappointment In Life Or Sudden Loss Of Loved One
Monalisa Chinda Visits Kirikiri Prison In Lagos, Donates To Female Inmates