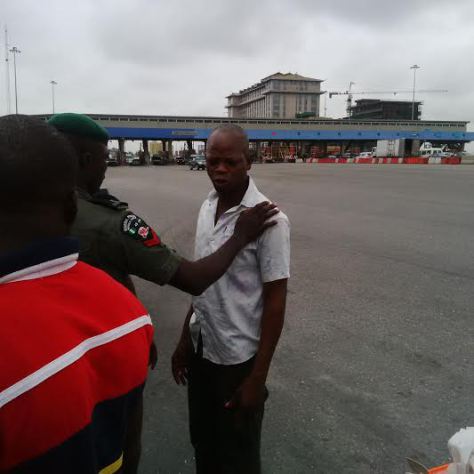 Lagos State Police Command has arrested a land-grabbing gang leader who allegedly erected a toll gate and was using it to extort money from motorists and other persons in Lagos State, western Nigeria.

The suspect, Hammed Afolabi popularly known as Aboki was arrested at Kayode junction between Mushin and Onipan areas of Lagos.

According to the police, Afolabi assembled some men and erected a toll gate and intimidated, threatened and extorted money from innocent people.

We gathered that the group led by Afolabi collected between N200 and N500 from private car owners, while truck drivers paid between N1000 and N2,000.

Taxis and commuter bus drivers are forced to pay N100 or more and pedestrians also were made to part with certain amount of money.

This has been going on before the police arrested Afolabi while his other accomplices escaped.

He was charged with extortion, intimidation and conduct likely to cause breach of peace.
Afolabi who denied all the allegation pleaded not guilty when he was arraigned before the court.

The presiding Magistrate, Mrs Joy Ugbomoiko granted him bail in the sum of N20, 000 with two sureties in like sum.

He was remanded in prison custody pending when he will perfect his bail.