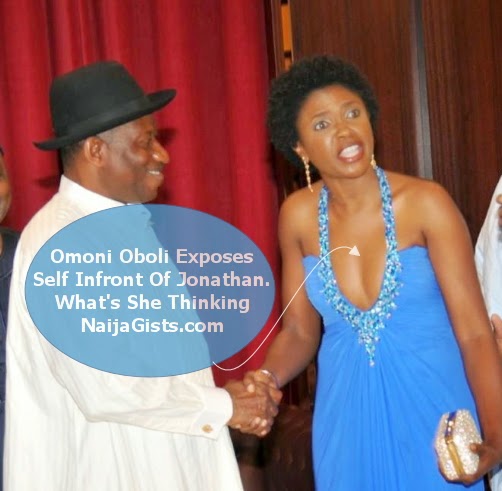 Omoni Oboli has come open to defend the controversial dress she wore to Aso Rock for the premiere of her first movie ‘Being Mrs Elliot’ last week.

The mother of three handsome boys said there is nothing wrong in the v-neck dress that exposed her bare chest during the private screening of her movie at Aso rock villa.

See excerpt from her recent interview below:

Some people raised eyebrows about the outfit you wore to Aso Rock. Were you styled?

I was not styled.

Did you feel that the outfit was appropriate?

Yes, I felt so. Because there was really no vital part showing if you saw the pictures online. And another thing is that the angles that a picture was taken can portray certain things that was not there.

Why do you think people condemned it?

Maybe I should ask: Why you?

It is God’s favour. That is it. It can’t be something else. I shook the president on that day and that was the second time ever that will be shaking him. First was at the burial of his brother that all of us went for, so we had the opportunity to shake him. This was the second opportunity to shake the president. I do not know him personally at all. So, it is just God’s favour. The truth is that favour is not fair. God decided to smile on me. Have I had my bad times? Of course. Last year, there was a time I was crying every day for months. Did anybody hear about it? So, these things happen, it is just God’s favour. And I am not going to let anything pull me down. First of all, I do not read blogs. I do get to see the negative comments.  It doesn’t matter to me. My true fans know who I am. And these are the people who matter to me, not the people who see the negative things.

Can you tell us how the screening of your movie by the president is a big thing?

It is a big achievement for the industry. It is not only for me. Like I said earlier, every other person will be thinking: “what else can I do to top the presidential screening?” And that translates into a healthy rivalry. Healthy rivalries anywhere help to improve things. Someone would be thinking I need to do something bigger. And that is the way to grow. It becomes unhealthy when you try to pull me down because you want to be on top. And this is the one thing I feel that the press should talk about in Nigeria. The whole pull-down syndrome is wrong. I always say to people, I do not want anybody to fail. My wish is for everyone to be successful. The fact that you are successful does not stop or hinder my success in any way. If you look up in the sky there are more than a million stars. Have you ever heard that one fell down? No.  They are all there. There is a space for every star to shine. Until we start to build ourselves, we are never going to get that level we expect. Until we start to celebrate one another, we are not going to get there.

Some people are also saying that something must have gone under before the president could see your movie. What would you have to say?

Why are they saying that? If it was a guy that did it I know no one would be saying that. That is the problem. It could have been a guy’s movie. Would they say he had an affair with the president? When it is a woman’s case things must take a different dimension. This is wrong. Women cannot always be relegated to symbols of sexual pleasure. I did not have any affair with anybody. It was God’s favour that the presidency was willing to see my movie. That is about it.

What is sexy in this naked wonder she is wearing???…. A mother of three for that matter.

If Omoni Oboli can do this, then all Nollywood stars need deliverance.