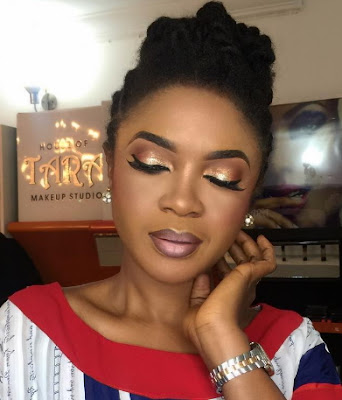 Nollywood actress Omoni Oboli has finally opened up on how she overcame the stress caused by a recent copyright infringement lawsuit filed against her by Jude Idada.

See excerpts of an interesting interview she granted to The Entertainer below.

How was the experience on the movie set of ‘The Women’?

It was quite an experience working with women that I was already familiar with. The director, Blessing Egbe, is someone I have worked with in the past too. We have actually produced a movie together some years ago so she is a friend. Ufuoma Mcdermott is one of my best friends, Kate Henshaw too is a good friend and Katherine is hilarious. So, we had so much fun on set. Katherine and Kate are crazy; many times we would burst into laughter. I like women a lot, but not in that way people may think of. I firmly support women so working with women is fun for me any day.

What is the major take home in the movie?

It is to be honest, truthful and upfront about things. At the end of the day, when you share a lot with friends, everything will be scatter at some point. And somehow secrets always finds a way out.

Don’t you agree that it is unwise to disclose certain things to your husband?

Well, if you were not upfront from the beginning and you know the kind of person you are with, and if the secret can be kept, you may want to keep it. But the problem is – can the secret be kept forever? Who knows maybe another person knows somewhere and that person could show up one day to talk about it.

How did you form a bond with Uche Jombo, Ufuoma, and Kate? You ladies have been friends for years…

I think we just found ourselves. I don’t know how to explain that and it was not a deliberate effort. We found out that we had many things in common. You know like minds attract. We found out we could talk to each other on issues or things happening in our lives and you will never hear it anywhere. I think for us, the most important thing is that we can trust each other. There is actually genuine love and trust.

But being a firm supporter of women, how do you feel having just male children?

I know it is unfair to me; I am such a girl. I mean I would have loved to have a girl child. I am very feminine, and I love girlish stuffs a lot. I love bags and I would love someone to always help me to hold my bags. But I felt God wanted me to be surrounded by tough guys so I am a princess in the house.

Are you satisfied with the performance of your movie, ‘Okafor’s Law,’ so far?

That is about my best movie so far.

In spite of the controversy that surrounded the movie before its release?

I will not lie about it. It was a terrible experience, it was one of the toughest points in my career. And of course, you know my father died like five weeks after the lawsuit’s drama. So, I felt it was just from one problem to another and I just totally fell apart.

Was there a doubt that the movie may not make much effect again?

I didn’t have any doubt. The only thing was that I wanted the movie to be played.

You just admitted that the lawsuit filed against you was the toughest period of your life. So, how did you pick yourself up when you were down?

The thing for me is that I believe life happens. Yes, when things happen to us, they could beat us, break us and we could fall, but you have to pick yourself right up when you fall. When there is life, there is hope. As long as you are still alive and you still breathe, things will always get better. I am a very positive person and I always believe that no matter how bad things may look like, it will get better. The only person that can keep you down is yourself.

When you have a scandal, for instance, step on it and move on from there. Many people would just roll over and play there, but all you need to do is to go right on top of it and you take off from there. The only person that can stop you at that point is yourself. When you say to yourself that this is too much, I just want to stay home and cry all day, then things will get messier.

Though it is okay to grieve, it is okay to feel bad and it is okay for you to cry, you should also know that you cannot stay there forever. You need to stand up and go.

What role did your family play during the saga?

My family members were there for me all through. Whenever I am with them or see my husband and my kids, I feel the world is better. Even when things seem all bad, they are still there with me. As long as they are still with me and we are together, then we are fine. And my boys were unbelievable.

Though my husband was around for a while during that period, so many women surrounded me. Ufuoma literally moved into my house, she was sleeping on my bed. I had like four ladies sleeping with me every day. You know you don’t say everything that happens to you, but it was that bad. At some point, I started having panic attacks. I didn’t know what it meant to be in such situation, as I have never had panic attack in my life until that period.

Now that all is over, how did you feel about Jude Idada, the man who took you to court?

The truth is I did try to settle it out of court and that was not because I felt that I was guilty. I just didn’t want the stress, but it didn’t happen. At some point, I started to wonder what could be wrong. Is this worth all the stress? Is it worth what I am going through? ‘Okafor’s Law’ in next five years will be one of my least movies and we all must have moved on from it. But people see things differently, we are all different.

I don’t know how to hate because I am not wired in such a way. I have seen them in court and I have said hello. But I don’t know if we can ever be friends again. I am fine now, I am in a good place in my life.

You put out a post on Instagram where you were teaching your son how to cook, but certain people didn’t like it. Were you not offended by the unpleasant comments?

I even did more after that. Didn’t you see other ones after? I taught some of my other sons other things. At the end of the day, it is just a basic skill of life. My kids are going to the university very soon, my son is going to the university very soon. I have a son, who is almost 15-year-old. So, if he cannot cook, does that mean he will be eating junk food all through when he goes to the university? It is not even healthy for him and that particular one doesn’t like junk food at all. So, he has to know how to do basic things so that he can survive on his own. I don’t think it is a big deal to teach your sons how to cook.

Nani Boi Praises Wife, Says Celebrities Marriages Crash Because Couples Refuse To Make It Work
Belinda Effah To Women In Abusive Relationships: If A Man Hits You, Don’t Give Him Another Chance