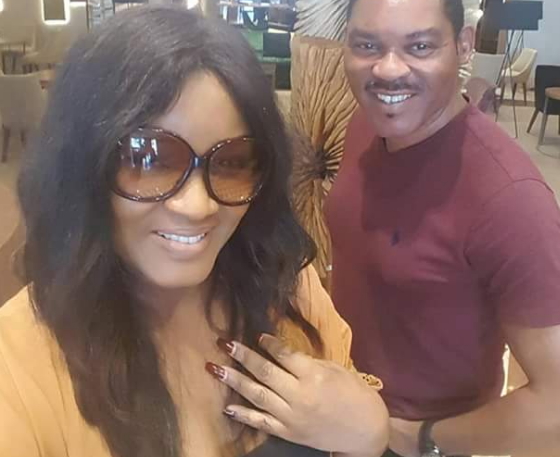 September 3, 2017 – Omotola Jalade Ekeinde: My Husband & I Have 20 Acres Of Land In Badagry Lagos, I’m Building A Film Village

After taking a long break from the big screens, Omotola Jalade Ekeinde is back with a bang!

The mother of four recently talked with The Entertainer about her marriage and career plan.

You took a rather long break from the movie industry, why?

I have been around but I have been building my businesses, film village in Badagry and some other personal international projects. I took time to creatively re-organise myself.

How far have you gone with the film village?

So far, my husband and I have over 20 plus acres of land in Badagry. He has his for his ‘Aquatic Jungle Entertainment’ and I have mine for the film village. We have started with the first phase, which will have a cinema and other attractions. It is in its early stages, but surely, we are making progress.

How soon would all these be ready?

That won’t be this year but maybe, next year. We are talking to some investors because the film village is quite a huge project. Buying lots of plots of land could be stressful. But at this stage, we are building gradually.

Talking about the film village in Badagry, are you in partnership with the Lagos State government?

No, not now. I had a meeting with the former governor (Babatunde Fashola); he knows about the project but I haven’t visited the new governor (Akinwunmi Ambode) yet. I also started another project in Ikeja, it is like a smaller version of what I am doing in Badagry. It is called The Double Doors Film Village. So, these are things that I have been putting together.

How do you connect closely with your co-stars when playing sex scenes, I mean the chemistry between actors in movies?

Sometimes you can tell while watching a movie that a couple doesn’t have chemistry. It is not something you can force. Some actors are very good at acting it. But sometimes, when it has to do with love, relationship, it’ is not easy to play. When you want to act like you love the person, there are some natural acts and gesticulations that you can’t force. But if you are a well-trained actor, you would not find that difficult. There are some little tricks to these things that some actors don’t know. You can make it happen and look real too, especially in love and sex scenes.

Talking about the film, Alter Ego, how did you come about having so much chemistry with Wole Ojo?

I have heard about him so much but the movie was the first time we got together. When we got to know we would be acting together, we spent a lot of time playing; we played very rough. I understand the power of being so close to your love interest in a movie, so we became very close even before the shooting. We ate together and spent lots of time together, and had each other’s interest at heart. It helped us to bring out our best in Alter Ego.

In Alter Ego, lots of movie critics believe you over played the raunchy scenes, did that get at you?

When I wasn’t even that confident, I starred in a movie called The Prostitute, which was released 22 years ago. If I didn’t die then, is it now? I am ready for them. I don’t even like watching myself on screen. If I do, I will feel like burning inside and might even start crying because I criticise myself a lot. Sometimes, I pity those watching especially when I poorly do a sex scene. I would be like ‘what was that for?’ It can kill the whole movie when it’s poorly done. For me, if a sex scene is not going to be well done, then why do it in the first place? If you must kiss, you should be able to kiss well; make it professional.

How have you succeeded to reinvent yourself? Every year you look younger and better in your role interpretation?

I think it is knowing what matters and being authentic and real. But in all, you must make sense. I am blessed that at a very tender age, I was able to find God, so my Christian values have been able to let me know what is wrong and what not to do. That way, the core me is real. I no dey form. With me, what you see is what you get. I don’t have time to live fake lifestyle. Whenever I come out, it is still about the real me. Talking about work, I never take it for granted. From the beginning of my career, I knew what I wanted. I had a vision and kept staying focused. Even now, I remain undistracted. The more you are inspired and focused, the more you are relevant.

Not, not at all! It is one of the biggest blessings of my life because I look back and ask myself ‘if I hadn’t gotten married then, would I have married now?’ It is hard nowadays. It is difficult to find someone who would love you for who you really are and not the image they see on the screen or the image they have in their minds of who you are. I understand what my unmarried colleagues are going through; it is not easy. Having said that, I also think getting married to my friend, a wonderful, confident and powerful man has really helped me. He allowed me to have that stability and still go out there and fly.

What happened to your music career?

I want to get back to the music industry so bad. I am coming back. It is not like I care what people are saying but I will be back soon.

Would your son produce your songs?

Well, I would like him to produce but we fight a lot. I used to complain a lot before but I have stopped because I know he takes after me. He knows what he wants and goes for it. I am always like ‘you’ve not even started yet and you are always acting so stubborn and pushing me around’. I don’t think we can ever get to work together because we are both headstrong.

But on the other hand, I would love to work with him because he is a very fantastic producer. I just hope someday we can find a balance, agree and just let it happen. I want to do music in a way that I would always be at concerts.

I don’t want to be like Tiwa Savage because that is her first career and I have movies as my first. I can’t compete with Tiwa. I like to express myself with music and I like to perform where people can come and watch me. So, I am planning on shaping my music career towards that end.

Nollywood Actress Mistura Asunramu Alao: Leaving Nigeria For US Is Personal, Nothing Special
Fayose Sacks Media Aide For Refusing To Invite Journalists To Cover His Publicity Stunt On Sallah Day