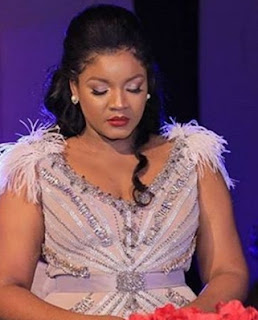 Nollywood most talked about woman of the month, Omotola Jalade smiled to the bank over the weekend after her birthday party wrapped up.

The actress who celebrated her 40th birthday in a 5-day event reportedly took home nothing less than 15 million Naira.

According to some key Nollywood practitioners at the event, by the time those helping Omosexy to count all the money spent on her by her top-class guests at the Landmark event center on Sunday, it was close to 4.5million.

NaijaGists.com Eagle eyes who were present at the event witnessed how top shots like Dangote, Gabriel Igbinedion, Shina Pellers and others handed over big envelopes to the actress while they were leaving the event center in addition to the millions they sprayed on her on the dance floor.

Another source who attended her Couple’s retreat said the event center was jam-packed with close to 200 couples who paid N40,000 each and about 100 singles who paid N25,000 each. That alone brought in close to 10.5million for the actress.

The source said Omotola has opened another money-making avenue for other Nollywood stars to follow.

So before the year runs out, we should expect two or more Nollywood stars to mark their birthday just like Omotola did.