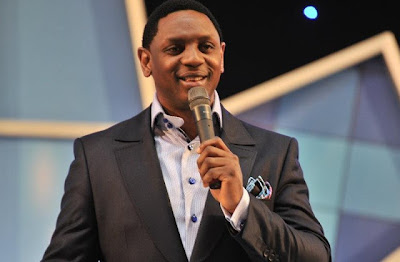 This letter is an indication of the ongoing rivalry fight among Nigerian pastors.

The founder of God’s House, Pastor J has accused his colleague in the Lord, Pastor Biodun Fatoyinbo of adultery.

Still unsure if this is a move to gain popularity but Pastor J of God’s House has released a lengthy letter on what he knew about COZA Pastor Biodun Fatoyinbo who was recently involved in a messy sex scandal.

The sex scandal controversy againt Pastor Biodun is still raging, we do not know when it is going to end. The young lady accuser Eze seems to have done her bit and left everything in the court of the reading public. So many opinions have evolved. Majority slamming both the lady and the pastor. While some think that her revelations was a great one and should help dissuade others from falling victim to the likes, many others have accused her of being a devil sent from the pits of hell to cause havoc.

So there’s division already, people taking sides and voicing out their opinion.

Just came across this stinker from a so called Pastor J of God’s House.

Please sit, relax and hear what Pastor J has to say and then ponder. We would not say more than that.

For the leaders of this people cause them to err; and they that are led of them are destroyed.”
Isaiah 9:16 . Let them alone: they be leaders of the blind. And if the blind lead the blind, both shall fall into the ditch. Matt 15:14

I was going to be silent on this sad, pathetic but true (in many shades) allegation against Pastor B and his popular and trendy ministry. My silence was borne out of respect for the kingdom of God and things that pertain to God. But all this changed when I heard the horrific tales of people who had been through the mess of this blind man, and the fact that he had no moral motivation to deny or accept the allegation; all he showed on Sunday was a demented swagger and perverse talk.

My sole purpose in writing this piece is to open the eyes of the world and believers to the hypocrisy and nonsense behind the pulpit, and to plea that these wolves and blind men stop deflating the faith of people who Christ died for. I am a Pastor, a full time minister at that, and I shall not sit back while
the name of my God, the ministry, and the works of other shepherds is brought to disrepute by the activities, action and inaction of a few blind men behind the pulpit.

I am tired of the nonsense of religion crying out, “touch not my anointed”; does this mean we cannot rebuke ourselves when we err, this much Paul did to Peter when he erred in Galatians 2:11 “But when Peter was come to Antioch, I withstood him to the face, because he was to be blamed”. It is therefore pertinent that I rebuke the wolves in shepherd’s clothing’s. It is time to set the record straight, and please don’t sell me the bullocks of judge not, I haven’t said anyone is going to hell, but of course if they don’t change, they have only one path.

It is high time we told the truth, which is plain, simple and without coloration. The stories of Franca and Ese is not only true but they are just a few tales of the tantalizing sex escapades of this clergy. This has been a recurring decimal in the ministry of the clergyman. This wasn’t the first time these stories will come forth, for those old COZA members, for those who were there when he was in Ilorin, when the church moved to Pipeline Road, Ilorin, having left Kwara Hotel, they will remember there was a time when the Pastor was suspended from ministering by his Father in the Lord, Rev Oset of Canaan Ministries. Rev. Oset sent guest ministers to the church every Sunday after that, but still Pastor B in his deceit will still minister in the pretence of introducing the guest minister, while he exhorts for minutes. I therefore laugh in mockery when He says his wife loves him, the woman has no choice. His core circle of Pastor Wole (Ilorin Chapter, the only man who maybe clean), and Pastor Flo (COZA, Lagos) knows of this fact, little wonder Ese said Pastor Flo said he knows about their adventures in that hotel room in London.

This is not the story of a hater; I don’t want or envy anything he has. He cannot ever have what I have and carry; neither do I crave for what he has. I am sure no one in the city of Ilorin, where this man started is bemused by these stories, no one who finished from the University of Ilorin during the period of 2003-2008, and was not a blinded COZA member can be mightily shocked at these revelations. I have heard tales of many more victims, I even heard from a woman who knows five friends who were victims, I saw it online the other day of a guy who said he formally works for him and he knows up to 130 people, outrageous as it may sound that too is true. Rev Oset in true conscience cannot deny the knowledge of these negatives. But we are a nation of hypocrites and religious folks; we ask no questions of leaders, so they can hide under the canopy of religion, even when they are filthy. Anyone who asks is rebuked by those who say, the bible says pray. It is sad that those who say pray themselves have not prayed. But Pastor B is just a decimal in an ever mounting number of wolves in the Church of Christ.

Someone told me yesterday that this can’t be the end of him and his tyranny, because even in Ilorin in those days, the allegation was rolled under the rug. On Sunday, August 25, 2013, the man leading certain blind men under the veil of religion and ‘spiritism’ said God told him not to say anything, he then said they are preparing a robust response. Who is fooling who? We must not keep quiet and watch the bride of Christ, the church, rubbed and undignified in mud and slime by a filthily rich pastor who thinks he can do anything and get away with it.

It is a pity that we run sensational press and media outfit in this country, and that our press is blinded by religion. If this were to be ‘saner’ climes the press would by now be researching, there would by now be investigative journalism. The truth would be dogged up and resurrected to life. For this is not about a mistake that a Pastor made, it is about a filthy man’s way of life.

And then about, “teaching a new level of grace’; please be reminded that Grace is not a license to sin, rather it empowers us to live above sin. Romans 6:1-2 says, “What shall we say then? Shall we continue in sin, that grace may abound? God forbid. How shall we, that are dead to sin, live any longer therein?” In my years of being a Christian, studying God’s word, preaching the gospel, listening to sound teachers, I have not heard of a grace that gives permission to sin. Stop being deceived, grace is the new dispensation, according to Hebrew 8:6-12, and under grace we do not follow any written code, law or traditions. That is done away with. The tablet of Moses is over with. But we are not reckless sinners; we are under a new covenant based on better promises. God’s law is written in our minds and hearts. We live according to His dictates. The Holy Spirit and our conscience convicts and judges us respectively. This is the only way we live a holy life. God’s strength and empowerment is the grace to do according to that written by God in our hearts and minds.

I write this with a heavy heart, though I wish I never had to write this, but I pray this madness stops. I know many who have stopped going to church, many whose faith has been derailed by the act of madness of this man, and many blind men like him. If they are not going to heaven, let them stop taking men out of the straight and narrow. No one understands the pain in meeting a man, whose faith has been derailed by a man who was supposed to help establish him. For such a man, words can’t bring him back, the best we can do is to pray and hope. I indulge the clergy to be of a higher moral standard.

My candid advice to the church at this end time is that the church must grow in knowledge; it’s high time we stopped bamboozling you. You must stop making idols of men. You must stop making men such as I, substitute for the Holy Ghost. Honour us; revere us… but that is where it ends. Without the Call, the Oil, and the Holy Spirit; we are mere mortal. But know for sure that this too shall pass; only the truth of the Gospel of the Kingdom abides forever.

For Pastor B and his sense making COZA people, remember the word of Christ in Matthew 15:14. How many of you even live life bearing the fruit of righteousness. Stop being blind, the ditch is close by. Look into this case, ask your pastor questions, seek genuine answers and not emotional rhetorics, hold him responsible, and do not forget the word of God, “then shall they know if they follow to know…” I am sure evidence abound. Seek to know from some key PCU members (who may need to be deposited in Gods ICU). Its time you hear not only about grace, but HOLINESS without which no one will see the Lord.

Finally don’t bother praying against me, I can say like Paul, “For me to die is gain, to live is Christ”, but I cannot even go now, because I am yet to fully finish the task set before me. Don’t waste your time using misguided scriptural interpretation. This I write is true, and I am sorry if you don’t like it. Your Pastor, and every other wolf whose conscience is not seared knows it is the complete true.