Now that its been established by the former queen of Ile-Ife, Olori Wuraola (now addressed as Her Highness, Zaynab Otiti Obanor Otiti) that she is done with the King and the palace, there seems to be no hopes of reconciliation.

The Olori had earlier today August 30, released a statement stating her decision to move on and close that chapter of her life. Dismissing allegations of infidelity on her part or any form of infertility, the queen said, “There is absolutely no truth to the media circulated lies of infidelity and infertility—on my end. What I can confirm, is that the Ooni and I are no more.”

While some wondered why a queen took a step like hers—what if there is a reconciliation?
“Sonia can never go back,” said one of her friends.

According to the source, the queen would not think of reconciliation currently because of the alleged humiliation suffered in the palace especially from the King and his three sisters—Folashade, Adesola and Adebimpe.

“There was a time she was abandoned and all scurried to the new queen, Bolanle. The king deserted her bed and for almost eight months, there was no form of intimacy between them. Of course she knew there was another queen who lived in the Ooni’s personal house in Ile Ife, she just ignored everyone and their treacherous moves,” the source said.

Ooni Can Never Marry One Wife

While friends of Olori Wuraola claimed that the couple had an agreement that she would be the only wife, palace sources maintained that there was no such accord. That even at the wedding in Benin on March 12, 2016, the subject of more wives was mentioned to the Queen’s father. Insiders close to Ooni said he has made up his mind to marry more women.

As at the filing this reports, it has been gathered that a new queen will be unveiled and more queens will be brought to the palace. “Its not possible for the Ooni not to have many wives. He is a king and a king must control many women in the palace,” a palace source said.

Before the King and any wife could share a bed, there would have been a series of rituals to cleanse and fortify the queen. For the beautiful Wuraola who was formally brought to the palce on March 12, 2016, palace sources maintained that there were rituals performed on her which lasted till late in the night. These rituals prepared Olori Wuraola from harm as the King, considered a deity, whose initiation process lasted weeks, is no longer an ordinary human being. 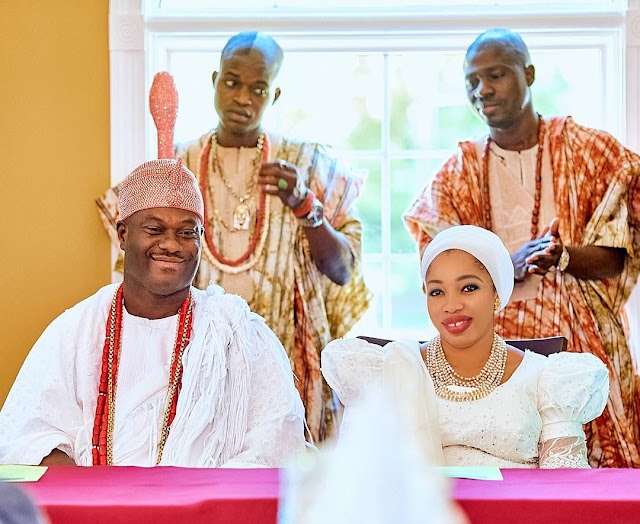 And anyone who wants to share his bed must also be protected.This protection also hovers around the Olori who can’t mix with other men as they risk terrifying repercussions.
“She definitely would not want such rituals performed again after all that had happened. The best decision is to take a walk,” sources explained.

The major factor why reconciliation isn’t possible between the Ooni of Ife and his former queen is the trio of Ooni’s sisters (Adesola Ogunwusi-Olojede, Adebimpe Ogunwusi-Daodu and Folashade Ogunwusi-Fadairo) still living in the palace. It’s also alleged that there’s also a strained relationship, between the Olori and the King’s father.

There were allegations of conspiracy, bickering and the sisters were alleged to have being the masterminds behind the emergence of a new queen.

“As long as they are in that palace, there is no way Olori Wuraola can return there. There was a time they left when she dealt with them but they are back and the queen would not even think of living there again,” another source said

Ooni Of Ife Marriage Crash: Oba Ogunwusi Blamed For Snatching Sonia From Her Lebanese Husband
How Ooni Of Ife Allegedly Kicked First Wife Bukola Out Of Palace To Fulfill Promise To Wuraola