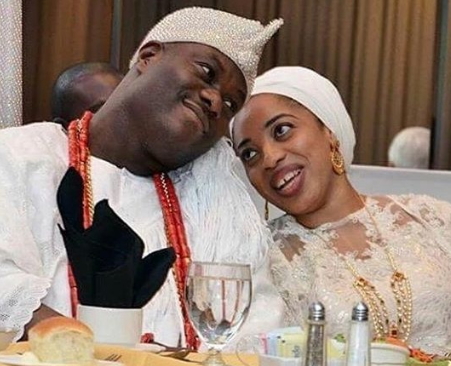 August 24, 2017 – Olori Wuraola Heartbroken As Ooni Of Ife Marries Yoruba Wife..How She Refuses To Greet Him At MMIA Airport

It is no longer news that the much celebrated marriage between the Ooni of Ile Ife Oba Enitan Ogunwusi and popular socialite Sonia Itohan aka Wuraola Zaynab Otiti has crashed.

The marriage which crashed shortly after Wuraola joined popular Nollywood actresses to march against domestic violence is a story of Royal love turned sour.

Palace insiders revealed that the king gave Wuraola a 30-ultimatum to remove all her belongings from the palace which she did however, her attempt to remove a $25K designer bed she bought from Lebanon met strong resistance.

Despite police presence, she was not allowed to remove the bed from the palace.

As at the time of this report, Oba Ogunwusi has married a Yoruba Queen simply identified as Bolanle.

She was introduced to the monarch by his three sisters.

An authoritative palace source NG spoke with about an hour ago said the public will not be seeing the new Queen because the monarch has been advised to ensure he didn’t reveal her identity.

The source added that the king is likely to marry two more Queens.

One of them, a middle aged woman simply identified as Bimbo is based in Canada while the other one named Banke works at Globacom.

Heartbroken Wuraola recently dishounoured the king at Murtala Mohammed domestic Airport lounge in Lagos when she refused to greet him as he was heading to Abuja with his entourage.

The drama that happened on Saturday the 12th of August 2017 was the first public indication of their marriage crash.

Nigerian Couple Seeks FG Help To Stop UK From Giving Their Son Up For Adoption
Be Original, Be You… Do What Others Have Never Done Before