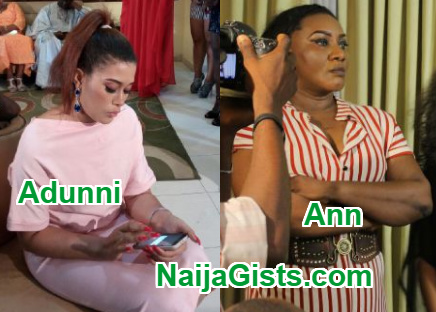 An open letter to popular Nollywood actresses Adunni Ade & Ann Njemanze who fought each other recently on a movie set over missing bangles. If you missed the story, read it here.

Nobody can be trusted even among the actors and actresses. The only time we can hold anyone responsible is when the hand of the actual thief is caught inside the cookies jar otherwise, we will just be speculating who stole what? when or how the said item is stolen. A lot of things might happened during the course of shooting movie in that hotel. Adunni may be fingered because she was the one left in that room while others were busy shooting movie. Is she the one who stole the bangles? may be or may be not no ones know.

Sister Ann, do not blame the director of the movie for not holding anybody responsible because he did not want to accuse Adunni wrongly. Only God’s know what transpire between that time. You may even surprise that the person who stole that bangle may be somebody who is more closer to you and only want to use Adunni’s situation because she was the only one who was left in that room at that time. Let’s us be realistic, if you are in the movie set and you are feeling tiresome, don’t you think you have right to go back in your room to relax yourself?

The same situation happened to me when I was in tertiary institution in 80’s. I was about to write my final papers because I have reference and I have to add extra year to make up for all my requisite. I was in this situation because of riot that was staged which I was one of the organizers. To cut the long story short, I have to stay off campus with one of my junior then in a rented house. One day a lady lost her wrist watch and suddenly I was fingered as a suspect because they assume I was the only one left behind when the rest people left for lectures. For crying out loud, I have just two papers to write. I was not a full time student at that time and plus I suppose to have graduated at that time, how do you expect me to hit the road everyday?

This incidence is more than what I taught it was because I was compelled to follow them to an elderly man who told us that he has to roll a Bible with a key attached to it and we have to hold it one by one. Guess what! when it was my turn that Bible did roll. Now they have their evidence against me that I actually stole that wrist watch but deep inside me and to God who created me I knew nothing about the wrist watch. Since then I never belief those traditional people who search thing using spiritual or traditional ways. The first thing that came to my mind was there were negative forces who were trying to prevent my success because I have to write one my papers the following day. They started saying a lot of things that I dress nicely, I look good, they didn’t know how i was getting money may be because I have stealing. These are the people who never knew anything about my parents.

The situation did not end there. That lady went to police station to report me and police came to arrest me. At that time I was totally broke down because I have to write a paper the following day. Even the guy that I was squatting with didn’t want to believe me at some point. Half an hour later a lady came up to me. She was an inspector of police. She asked me what happened, I managed to comport myself to explain everything. She was the one who told me to go that the lady did not have evidence that I stole her wrist watch. I went back home that day and went back to school the next day to write my papers.

My exoneration came when I went back to get my result. As I alighted from the bus, a young girl saw me. She called my name brother…..as I looked back, I recognized her because she was one of my neighbor’s daughter and she knew about what happened to me. She said they found that wrist watch. I said how, she said the landlady son stole the watch and sold it out to her sister friend whom after hearing that I was accused for stealing the wrist watch said no… Rotimi not actual name sold that watch to my sister friend. The truth was later revealed but all my accusers have gone but I went back to that woman (the land lady) she couldn’t say anything order than apologizing. Some neighbor upon spotting me, came closer and apologize to me. Then I wanted to go back to that fake spiritual man but they told me to ignore him that he was so sick that he could not talk to me. Since then I always been having second taught in blaming people whenever incidence like this happens. Also I think God wanted to show me how people cannot just to be trusted.?

At this point, I think the producer of that movie should take the blame for what has happened on that day because you don’t put all your casts in one room thereby causing overcrowding. In civilized Countries these actors and actresses must have separate hotel room. This is what happen when movie producer doesn’t want to pay for the accommodation. I think the best solution to this issue is for the producer to reimburse sister Ann the cost of the bangle and add that to the cost of production.