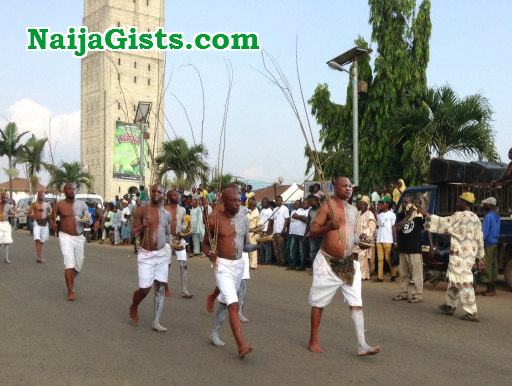 The landlord and residents of a house on Pipeline Way, Arepo, in the Obafemi Owode Local Government Area of Ogun State have abandoned the house after some Oro worshippers in the community dumped ritual sacrifice in front of the house.

Metro learnt that the cult group had been attacking some residents of the area under the guise of observing a ritual.

Our correspondent gathered that matters came to a head around 2am on Wednesday when they assembled in front of the house and dumped a big tray of ritual sacrifice in front of the building and threw fetish materials inside the house.

They were also said to have vandalised vehicle in the compound and threw stones into the rooms of the residents.

When our correspondent visited the house, he observed that the residents were outside.

The landlady, Mrs. Yemisi Falola, told our correspondent her family was in danger, adding that the cultists attacked her daughter as well.

She said, “We have been living here since 1996 and our house is directly facing the community primary school.

“One of the teachers, called Reverend, and a youth leader, Rasaki Fashina, extended the school field to encroach on the road. They barricaded it with rolls of tyres. The reason is that they usually lease out the field for parties and they make money from the business.

“Because of this, motorists had no road to pass and most times, they have to take the frontage of our house. We called the attention of the community leaders to it, but we were ignored.

“On May 17, about 40 of them came to threaten me in the church. On June 2, I asked an electricity official to erect some poles for me, but they attacked and chased him away.”

She said she reported the matter at the Ibafo Police Station and the police took her statements and invited some of the suspected attackers.

Temporary peace reigned until when the community imposed a dusk-to-dawn curfew, because of an appeasement ritual.

Our correspondent learnt that around 2am on Monday, the cult members entered the neighbourhood and attacked the house.

A resident, who did not identify himself, said, “They were shouting, ‘Oro is carrying firewood, Iya Bukky (Yemisi) come out.’ Everybody was scared. We called the DPO that same night, and he said we should see him early that morning.

“On Tuesday night, they came again and dumped fetish things in front of the house. Today (Wednesday), around 2am, they came again. They broke the windscreen of the vehicle in the neighbourhood and left a big bowl of ritual sacrifice in front of our house.

“They also left behind a flag so that people would know they were the ones responsible.”

It was learnt that policemen from the Ibafo station visited the area and arrested one of the cult members, but his friends fought off the police.

He said the family had already petitioned the Area Commander, Sagamu, and the Ibafo Police Divisional headquarters over the matter.

But the youth leader, Fashina, denied the allegation, adding that the Falolas were the cause of their problem.

He said, “Their house is opposite a school. The woman of the house, however, wants to do five to six businesses at a time. She sells firewood, mould blocks and all kinds of things.

“We told her to remove her firewood, from the road, which was injurious to the children in the school. But she kept insisting that she had the right of way and there was nothing anybody could do about it.

“Is it possible for this woman alone to be fighting the whole community? We wrote a petition that she should remove all the obstructions on the road, but she refused.”

The traditional ruler of Arepo Community, Mr. Solomon Atanda, said he would get back to our correspondent.