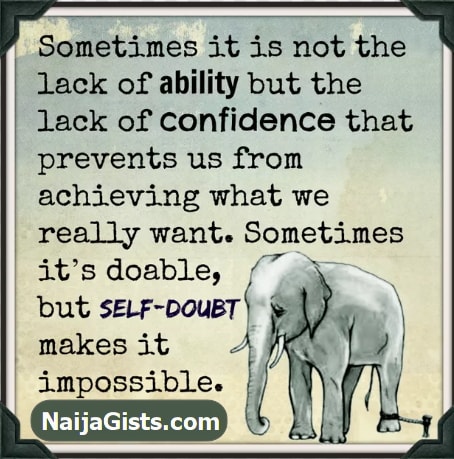 We are what we believe we are ~ C.S Lewis

Being told you can’t do something by others at times open the door to a challenge. You challenge yourself to do the supposedly impossible for you in a bid to prove the person wrong. You work so hard till you are able to do it successfully. But then, it happens sometimes that the doubt is coming from within you, it’s called self doubt, that is when you doubt your capability and having the feeling of been inadequate enough for a certain task.

Can I do it? What if I fail? What if it doesn’t work out? Many of these questions usually crept up in the mind, it might be informed by an external factor like been looked down upon by the people around or most usually caused by the knowledge of a past mistake that gives one the feeling that this one too might go wrong. It is your ability to overcome self-doubt and use resources that will accelerate your motivation towards success.

Self- Doubt is a diminishing factor on its own which could hinder a bird from flapping its wings in an attempt to fly though it knows it can.
It is the limiting factor affecting man and hindering him from working towards his goals.
A ” Self-doubting Thomas” will never move his feet nevertheless walk because he will keep having a long list of bad premonitions about what will take place if he moves.

Now, there is something about fear. It’s a faceless monster that fly out the moment you have enough courage to face it. Never be afraid to fail, for failure is a step toward success. The successful people are not the ones who has never failed, they are men and women who have failed too many times but they refuse to give up.

Thomas Edison tried 1000 experiments to make a bulb that will glow with electric light and he failed for those 1000 times but then, he did not give up, he did not doubt himself, he was so sure of his ability that he stick to his game and the good news is there for us all today.

We have the electric bulb and Thomas Edison as its inventor. Did you know about the 1000 times he struggled? No! That does not usually make the news, it doesn’t mater to the world how it’s done.

So if today, it’s always constant failure for you, keep on, never relent one day, you shall make the big break. fail today to try again tomorrow, that’s the mantra! . Do not let your self- doubt be a barrier towards your dreams. Do not let self-doubt waste your resources. Do not let self – doubt keep pushing you down when you can shine.

Of course, you are afraid of venturing into new areas. But, who isn’t? Everyone has an ugly monster they hate to face in their line of work. But the truth is they keep on pressing and believing they will cross that bridge when they get there.

Arm yourself with a lot of courage, motivations, ideas, information, and logic then embark on a journey to make a difference.
Quivering won’t help you move an inch. Coming up with a long list of things that could go wrong isn’t worth it. What would be really worthy of your time is coming up with a lot of ideas on expansion or how you wish to further after your first success.

Then, you will feel what it’s like to be excited. The rush of adrenaline you will feel, the quirk smile that will lighten up your face, the heavy beating of your heart as your mind travels and see a lot of possible future ahead.

So, cheer up today! Ask yourself, “What if there is no such thing as failure, what are the things I will try out?” Pen them down and start working on them. Those things your heart wants? Those are the fields you think you could act your part or make a difference. Those are the things you want to know more about. Stop being the one drawing yourself away from success.

Believe in your ability to make a good difference regardless. Work with your resources and watch yourself excel.

Quote of the week:

The Only limit to our realization of tomorrow will be our doubts of today ~Franklin D. Roosevelt

Continue Reading
You may also like...
Related Topics:doubt, failure, fear, overcoming, self, self confidence

Combating Dream Killers: How To Face Your Fears, Pursue Your Dreams, And Fulfill Your Potential
The Power Of Optimism: How To Train Your Mind To Think Positive