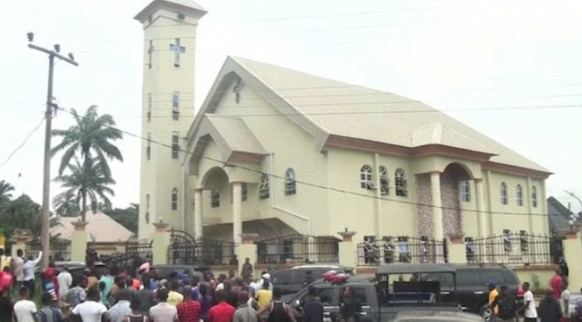 St Patrick’s Catholic Church in Ozubulu community, Anambra State was the scene of an unspeakable tragedy on Sunday August 6 2017 .

Just as the early morning mass was about to start the ‘Prayer of the faithful’, the service was brought to a halt by an attack from gunmen which left 12 worshippers dead and several more wounded. Since then, a number of accounts, both official and hearsay have emerged. There have also been some ‘investigations’ by people familiar with the Ozubulu community and its recent challenges.

The narrative that has emerged so far is that the tragedy that took place was instigated by two citizens of Ozubulu who live outside of the country. The tale is one straight out of a Nollywood movie. It is a story about drugs, money, deadly violence, turf, betrayal and power. There is even an ‘exotic’ location thrown in – South Africa. There is a full cast of characters in the story with lead actors, supporting actors, side-kicks, directors and producers, with a Part 1, Part 2, Part 3 and no end to the production in sight.

One of the many concerns about the Ozubulu tragedy is the desecration of the sanctity of a place of worship. A church is meant to be a sanctuary, a sacred place where you are safe in the hands of God. For the period of time you are there, you are meant to lay all your worldly worries at the feet of God Almighty. As you step out of the church after the service, you are expected to be full of resolve, refreshed and recommitted to doing God’s work.

A church is holy ground and one of the worst things that you could do as a human being is bring blood into the house of God. The same inviolable principle applies to places of worship in other faiths. So why was a holy place drenched in blood at Ozubulu?

I believe that one of the main reasons why this happened is because the church is no longer considered a holy space, a place immune from violation and safe from desecration. A church is now seen as nothing special, no different from a social club, sporting ground, owambe party, political rally or gathering of shareholders attending an Annual General Meeting.

A lot has been said and written in Nigeria about the worrying trends in our churches and the huge gap that exists between the elites who own and run the churches, particularly the Pentecostal ones, and the majority of their congregation who are poor but still manage to subsidise the lifestyles of the church leaders. The older orthodox churches have decided to join in on the action; after all, the business of organized religion relies on a very straightforward ‘bums on seats’ strategy. More souls won equals more money to sustain the ministry and spread the word.

Every business has to aim for success, whether it is faith based or secular. What is deeply troubling is the lack of caution and of discernment that has created a level operational field for all manner of scoundrels to literally take over the house of God.

It is not possible for recipients of charitable donations to screen every penny to determine the ‘cleanliness’ of its source just as the Catholic Bishop of Nnewi Diocese stated in response to questions about the mysterious nature of the benefactors. However, in light of the recent disturbing trends happening in places of worship, some circumspection is called for in the way and manner in which donations are solicited. Ozubulu is a small community. It is the kind of place where everyone knows everyone’s business. The people there know what their children at home and abroad are up to. Even if they choose to look the other way, they know. And this includes the clergy.

Edifices such as churches and cathedrals used to be built over many years, with the clergy and community toiling together to finish the project. Now it seems there is a competition to see how many rich people can build houses for God in their community.

There is also another trend with the less affluent sector of the church. Last week there was a list that was being circulated online, allegedly from True Vine Power House given to a couple who wanted to get married in the church. The list included specific fees for the officiating ministers, food for the clergy and church workers and – don’t laugh – a suit for the Pastor and his wife! It is customary to give officiating ministers a cash gift, but it is supposed to be voluntary and not mandatory.

Providing refreshments is also usually done, but this list was clear about the brand preferences of the church – they wanted Five Alive juice and canned Maltina. The pastor of this church does not have the kind of empire that can enable him buy a private jet. So perhaps we should not begrudge him a new suit every week, depending on how many weddings he conducts. This is what the house of God has been reduced to. A place where people have to pay for services which should be rendered as part of God’s work, a place where modest contributions within the means of parishioners is not enough, a place where congregants are coerced or manipulated into parting with huge sums of money to sustain a lifestyle they do not live themselves.

A place where dubious characters make the largest donations and receive the highest honours, over and above the poor and lowly who toil day and night. This is why the church has become just like any other site of social engagement and interaction. And this is why gunmen had the audacity and heartlessness to barge in to the house of God and open fire on defenceless worshippers.

There was a protest at the Great Faith Ministries International Church in Detroit, Michigan in September 2016, led by a group called New Era Detroit. They were protesting the lack of accountability of wealthy black pastors who own luxurious homes and drive Rolls Royces, yet they have their churches in some of the poorest communities in the country. To add insult to injury, they had the audacity to ask for U$1,000 donations at a church service.

If you did not have that much you could give U$300 and there was an ATM machine if you needed cash! This was too much for some of the congregants so there was a protest right there in the church. We have a few of those churches around here too, but we have not heard any loud protests against brazen hustling for church donations. When we ask what happened to the Gospel according to Mathew 6.3, ‘But when thou doest alms, let not thy left hand know what thy right hand doeth’, we are reminded these are different times. Giving anonymously does not translate into Knighthoods in the church, votes at elections or coveted chieftaincy titles.

Another thing that I found alarming, reading all the commentaries on the Ozubulu incident, is that most of the analysis focused on the emerging sociology of the Igbo culture where money has become the god that people worship. Any drop-out who manages to make a fortune from any kind of business is received with open arms and the money they throw around is respected with no questions asked. I believe this pathologising of Igbo people and their culture (either by themselves or others) has to stop. The blind worship of money is not unique to the Igbo community.

Criminal enterprise is an equal opportunity employer, and even though it might use an ethnic division of labour every now and then, criminals are to be found all across the country – kidnappers, armed robbers, terrorists, ritual killers, fraudsters, looters of treasuries, riggers of elections, sexual predators, drug barons, no community has a monopoly over criminal activity.

This is not an Igbo problem; it is not even a uniquely Nigerian one. We all have a role to play and we all have questions to answer when something like this happens. Let the true servants of God step up. Let our security agencies do their job without fear or favour. The devil will always show up wearing Prada and bearing irresistible gifts. We only make it easier when we allow him a customized seat in our places of worship.

About the author: Adeleye-Fayemi is a writer, Gender Specialist and Social Entrepreneur.

Policemen Deployed To EFCC Boss House In Abuja & Maiduguri
October 1st Deadline: How To Prevent A Repeat Of Rwandan Genocide In Nigeria