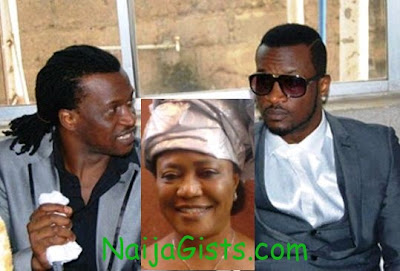 In an exclusive interview with Encomium magazine, P-Square music duo speak up on the circumstances surrounding their mother’s death.

P-Square’s mother, Mrs Josephine Okoye passed away on the 11th of July, 2012 after a brief battle with diabetes.

Read excerpt from the interview below

She has been diabetic for years, and when it started many months back, we got good doctors to treat her in Jos. But when we couldn’t get good result, we brought her to Lagos. We took her to St Nicholas Hospital and everybody who went to see her in the hospital cried. She had lost a lot of weight and couldn’t recognize us. She called me Jude. I can never forget that day.

She went through a lot and gradually she got stabilized thereafter she was moved to the intensive care unit (ICU) and she spent two to three weeks there. So we thought of moving her to South Africa, India or the US for proper check up. We eventually took her to India about four weeks ago and we talked every one hour. The Indian doctors made sure to clean everywhere before the surgery, and the operation was successful. Our sisters who were with her confirmed this to us and we were very happy to hear the good news. She was okay before the eventual death and for a day one of my sisters was unconscious because she couldn’t believe it.

We wanted to travel to India the following day she died (Thursday July 12) but we changed our plans. Her body arrived Lagos on Sunday July 15th. No concrete arrangement yet on the burial.

A Little About Late Josephine Okoye

She is survived by her husband, grandchildren and seven children.

Stay in touch with NaijaGists.com for update on her burial.