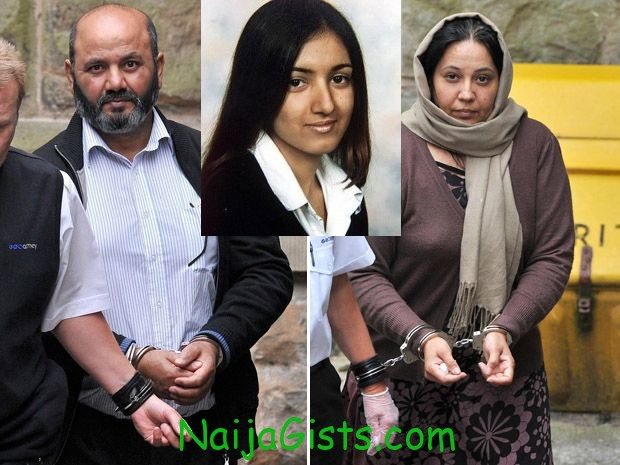 UK-based Pakistani parents were sentenced to life in prison on Friday for the murder of their 17-year old daughter, Shafilea Ahmed for refusing arranged marriage and for her indecent dressing.

Shafilea Ahmed, 17, was suffocated to death by her own father and mother with a plastic bag.

49 year old Farzana Ahmed and his wife Iftikhar, 52 were sentenced to life in prison for the brutal murder of their own daughter.

Farzana’s cousins from Uttam village in Pakistan were also sentenced to 25 years in prison for their involvement in Shafilea’s murder.

The Story of Late Shafilea Ahmed

According to a prosecutor, Andrew Edis, Shafilea was 10 year old when she began to rebel against her parent’s strict religious rules.

She would hide her make-up, western clothes and false nails at school.

She’ll then change into conservative Muslim attires before her parents picked her up from school.

According to Shafilea’s younger sister, Alesha’s testimony, she witnessed the brutal murder of her sister when she was 12.

How Shafilea Ahmed’s Parents Murdered Her

One day after an intense argument about Shafilea’s dress, her parents knocked her down on a couch, stuffed a thin white plastic bag into her mouth and held their hands over her mouth and nose until she died, Alesha testified.

As she was struggling, her mother said, “just finish it here,”
Although Shafilea’s other siblings contradicted the testimony, the last-minute emergence of a diary convinced jurors.

The diary belonged to a friend of one of Shafilea’s other sisters, Mev. In it, the friend relays conversations she had with the sister about the night Shafilea died — details that supported Alesha’s testimony. “The strong message goes out and should be very clear: If you engage in honor killings — if you engage in forced marriages — you will be caught and brought to justice,” said Mohammed Shafiq, chief executive of the Manchester-based Ramadhan Foundation, a Muslim organization.

When Shafilea became a teenager, she became interested in boys — something that spurred punishment from her parents. School officials alerted social services in October 2002 after Shafilea came to school with injuries to her face.

That same month, Shafilea told a social worker that she was to be married in Pakistan in February 2003.

In January 2003, she ran away, telling friends her parents would not leave her alone. She eventually returned. In February 2003, she ran
away again and pleaded with British authorities to allow her to move out of her parents’ house because, she said, they were abusive and trying to force her into an arranged marriage. Some of Shafilea’s own words also proved compelling to jurors. In the application form to move out, she said she had suffered from regular domestic violence from the age of 15.

“One parent would hold me whilst the other hit me,” she said. Her father snatched her off the streets, however, in the same month as the application.
He bundled her into a car and took her to Pakistan against her will, Alesha said. In protest, Shafilea drank bleach and was brought back to Britain in May 2003. She spent eight weeks in the hospital trying to recover from damage done to her throat. Even in her weakened and desperate state,
Shafilea’s parents were relentless.

One night, her parents complained she was wearing a T-shirt and wasn’t properly covered up, according to Alesha. The younger sister said Shafilea struggled and struggled as her parents held her down. Alesha described that after the attack, her siblings ran upstairs and she watched as her father carried Shafilea’s body to the car wrapped in a blanket. She was reported missing shortly after, with her parents making a teary-eyed media appeal for information leading to their daughter.

But police were suspicious — so much so that they bugged the house. Shafilea’s decomposed remains were eventually discovered in the River Kent in Cumbria in February 2004, but it wasn’t until 2010 that Alesha provided the key testimony. Last year, the British government’s Forced Marriage Unit investigated more than 1,400 cases of forced marriages, most of which occur
in Muslim communities.

This is cruelty of the highest order.