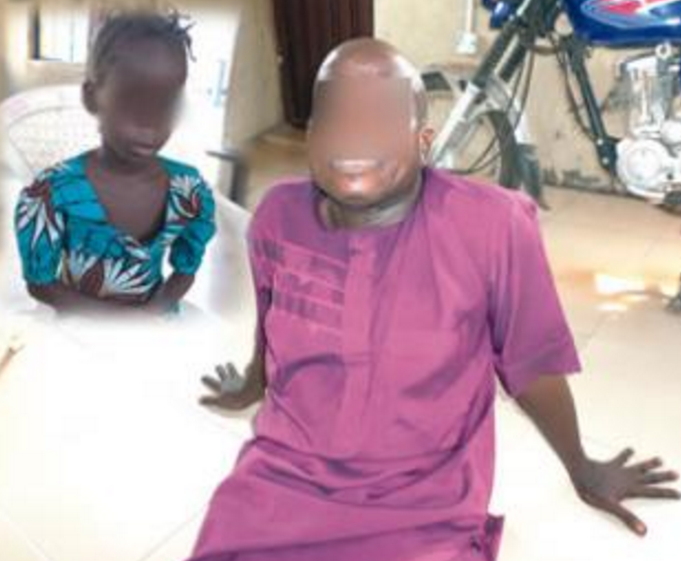 May 16, 2016 – Pastor Accused Of Sleeping With 7-Year-Old Girl On Church Altar In Egbeda Ibadan Confesses

A fake Pastor identified as Isaiah Ojo accused of sleeping with a 7-year-old daughter of his fellow pastor on the church altar has confessed.

The incident which happened last week Monday the 9th of May 2016 caused serious tension in Egbeda area of Ibadan as the little girl is yet to stop bleeding as at Friday.

The randy pastor was arrested on Thursday the 12th of May by Egbeda Police division officials after initial disappearance.

The incident happened at Dayspring Family Chapel in Egbeda last week when the girl went into the church premises to play with her younger brother.

The suspect reportedly lured her into the church and locked the door.

While narrating her ordeal, the innocent girl said;

“Daddy Dayspring (as he is fondly called) told me to lay on the rug, he laid beside me and removed my underwear and then removed his trousers. He first put his hands into my private and later put his p**is in my vagina and I cried. He removed it and blood started coming out. “

The suspect also confirmed the girl’s story at the police station.

See his dirty confession below:

“The girl came into the church and told me Daddy Dayspring, my vagina is itching come and lay on me also. When I moved nearer, I could not do anything with her; I did not insert my penis in her vagina. “What happened next was that I brought my penis out but I could not penetrate her because her vagina was tight. My intention was to touch her, not to damage her. When I saw that her vagina was very tight, I withdrew my penis and left. There was no blood at that time. I don’t know how blood came out of her.”

The suspect said he last slept with his wife 6 months ago.

His case has been transferred to SCID Iyaganku for criminal prosecution while the innocent girl is receiving treatment at UCH Ibadan.

Police has locked up Dayspring family church in Egbeda until further notice.