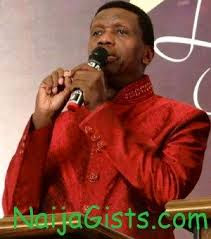 RCCG GO, Pastor E.A Adeboye, has advised all Christians to pay their tithes.

Adeboye said this in his latest sermon on Sunday, revealing to his congregants that dangerous consequences await those who do not pay tithes.

This sermon is in reaction to the campaign of popular Lagos-based radio presenter, Daddy Freeze, who has been urging Christian faithful not to pay tithes to churches.

But Pastor Adeboye advised Christians especially his members on the dangers attached to none compliance to paying of tithe.

In his sermon, Pastor Adeboye asked the congregation to avoid divine curse like a plaque by pleasing God and also in paying of their tithe.

Adeboye however debunked Freeze’s opinion saying, “Even mad people will not come to church to drink alcohol.”

Adeboye, enumerating the secrets of breaking forth, said “Avoid divine curse like a plaque. Somebody showed me something on the Internet on the question of paying tithe or not and the fellow said tithe is supposed to be used to buy alcohol and drink in the church.

Now you know who is talking, even mad people will not come to church to drink alcohol, no matter how crazy that fellow is. Ask him to come to church and drink beer, he will tell you that he is not that crazy, because even in his madness, he knows that it is the house of God and he will refuse to do such thing. But this fellow said otherwise that tithe ought to be used to drink alcohol.

“I know who is talking and I did not want to worry myself about such person. But please do not let anybody get you into trouble by attracting God’s curse to yourself, please pay your tithe.