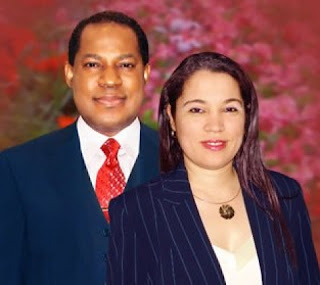 Some secret documents link family and associates of one of Africa’s most popular pastors, Christ Embassy founder, Rev. Chris Oyakhilome, to an offshore company in the British Virgin Islands.

A business associate of the pastor says some directors in the company held shares on behalf of the pastor’s daughters, Sharon and Charlyn, who are now teenagers.

The company in question is Gmobile Nigeria Limited, an offshore firm incorporated in 2007 in a Caribbean tax haven, the British Virgin Islands, according to a cache of documents reviewed by Premium Times and the International Consortium of Investigative Journalists (ICIJ). The shareholders listed in the documents include Oyakhilome’s wife, Anita; another pastor in his organization, Thomas Amenkhienan; a business associate, Aigobomian Inegbedion; and another British Virgin Islands’ company, GTMT International Group Limited.

Oyakhilome is founder and president of one of Africa’s largest Pentecostal churches, Believers Loveworld Inc. (aka Christ Embassy), which claims “hundreds of churches … affecting millions of people” in all the continents of the world, with a strong presence in the United Kingdom, South Africa, United States, Canada and Nigeria.

He has also set up satellite broadcast channels in the United Kingdom (LoveWorld TV), South Africa (LoveWorld SAT) and Nigeria (LoveWorld Plus). He hosts a TV show, Atmosphere for Miracles, which airs on television networks in Africa, North America, Australia, Asia and Europe, according to his church’s website.

His church has a series of business interests, the website says, that include vibrant TV and Internet ministries and a publishing outfit that churns out the popular “Rhapsody of Realities” booklet, which is like a second Bible to members of his church.

He is as controversial as he is entrepreneurial. Critics believe he is excessively flamboyant, dressing most of the time in expensive suits, top-of-the-range shirts and ties and exotic shoes.

Some of his critics have alleged that he has staged miracles, bringing forth impotent men, infertile women and people with AIDS who testified they’d been instantly healed. In the wake of controversy over faith-healing practices by Oyakhilome and other pastors, the Nigerian government banned unverified miracles from television in 2004.

His wife, Anita, is also a pastor in the church. She heads the international division of the ministry and is regularly credited with growing the church’s presence around the world.

Until now, there has never been any suggestion that she was involved in financial dealings.

The documents show that some of these individuals held shares in trust for two minors. The records don’t identify the minors, but Inegbedion confirmed that the minors referred to in the documents were the Oyakhilomes’ daughters, quickly adding that there was nothing wrong with that.

“Their parents bought the shares for them because they have rights to own shares,” Mr. Inegbedion said. “A day-old child has a right to own shares in companies.” He declined to say which of Gmobile directors held shares in trust for the girls.

The Oyakhilomes did not respond to emails sent to their personal and church websites.

In 2007 Anita Oyakhilome and her partners retained the services of a Dubai-based company, Covenant Management Consultancy (CML), to help it register Gmobile Nigeria Limited in the British Virgin Islands (BVI), a Caribbean chain largely controlled by the United Kingdom. On June 26, 2007, CML in turn approached BVI-based Commonwealth Trust Limited (CTL) to complete the task of setting an offshore company.

After some preliminaries — including name checks and consultation with lawyers — CML’s Susha George wrote to CTL’s Shonia Mathew on July 3 giving her the go-ahead to incorporate Gmobile. In that same two-paragraph message, George informed CTL “two shareholders of this company are minors.” She also asked whether additional documents or procedures were needed for the minors to be owners of the company.

Mathew replied the same day, saying that shares of the company could only be held in trust for the minors.

“Please note if the beneficial owners are minors, then the shares would need to be held in Trust for them until they are of age to act in that capacity,” she wrote, adding that “it may be wise to contact an attorney regarding the formalities of the company.”

Aig Inegbedion…. “Nothing wrong with the Oyakhilome girls holding shares”.

Another curious aspect of the company, which became dormant on May 1, 2009, was the makeup of its board of directors. Its first director was not a human being but another offshore company, Covenant Managers Limited, an offshore firm also set up by Dubai-based Covenant Consultancy Limited in July 2005 to offer nominee services to corporations and individuals incorporating companies in the BVI. In the offshore world, nominee directors or shareholders serve as stand-ins that allow the real people behind companies to keep their identities hidden.

As first director, Covenant Managers approved the opening of a bank account in the United Arab Emirates or any other place in the world. It is not known in which bank the account was eventually opened nor whether it was used to move funds.

After Covenant Managers officially resigned, GTMT directors were brought on board together with Anita Oyakhilome, Inegbedion and Amenkhienan as directors. They were Willem Johannes Jacobus Van Der Merwe, Karen Ann Smith and Daniel John William Mills. Reporting by Premium Times determined that Van Der Merwe, Smith and Mills were based in South Africa but we could not ascertain how they came to be associated with the Oyakhilome clan.
Inegbedion said the idea of incorporating Gmobile in a tax haven was suggested by the South Africans, who he said argued that BVI was an ideal neutral ground for the business partnership the Oyakhilomes were forging with GTMT to carry out the business of distributing data compression software in Nigeria.

“We were looking for a neutral ground where both parties could feel safe,” Inegbedion said in a telephone interview. “So we had to go to British Virgin Islands. But it was our partners who handled the registration.”

The only South African partner Premium Times was able to track down, Karen Ann Smith, declined to comment on the formation and businesses of Gmobile. “You are on the wrong trip, guy, as I’m not interested in talking about that business,” Mrs. Smith said on telephone. When she was pressed for details, she said, “You are wasting my time, as I have no interest in speaking to you.”

Gmobile does not appear to have carried out any business in Nigeria, South Africa or the BVI. Inegbedion and another individual who identified himself as Danny Mills made a fleeting appearance before journalists in Lagos in October 2007, almost four months after Gmobile was registered in the BVI, to say the firm was unveiling a GMobile product which allows users to maximize data storage and make an array of communications and services possible.
Danny Mills was introduced as the international sales director of Gmobile, while Inegbedion was introduced as chief operating officer of an unknown firm, LW GNet Nigeria.

Apparently, nothing has been heard of that product since that event. Today, Inegbedion introduces himself on his Facebook page as managing director of Paradigm Biz Solution Limited, a company the Nigerian Corporate Affairs Commission also says does not exist in its database.

Remmy Nweke, a well-regarded Lagos-based communications reporter, was among those who covered Gmobile’s press conference at the time. “Well, they came and met the media and said they were rolling out an irresistible product,” Mr. Nweke said via telephone. “But that was the last we heard of them.

Inegbedion said Gmobile was unable to roll out the product because the company’s partners in South Africa failed to deliver after his team, led by Anita Oyakhilome, paid $1.8 million for a distribution license.

To all appearances, Gmobile was simply a failed business venture. But other companies incorporated in tax havens such as the BVI have become known for involvement with illegal activities, including money laundering and tax evasion.

Taking advantage of the loose laws in several jurisdictions, offshore companies are easy to form in tax havens and owners can remain anonymous while using nominee directors as fronts and deploying the corporations to hide ill-gotten assets, launder funds, dodge litigation or evade taxes. Diepreye Alamieyeseigha, for example, was convicted of stealing public funds while he was governor of the oil-rich Nigerian state of Bayelsa. The state recovered more than 17 million British pounds from him, including assets he held through Solomon and Peters Limited (a company registered in the BVI) and Santolina Investment Corp. (a company incorporated in the Seychelles). Last month, he received a presidential pardon. Nigeria’s anti-corruption agency, the Economic and Financial Crimes Commission, has also accused another ex-governor, Abubakar Audu, of using two offshore companies in Bermuda (another tax haven) to hide ill-gotten assets. Audu denies the allegations.

Dealing with a questionable firm
The BVI Financial Services Commission found CTL, the offshore services firm that helped the Oyakhilomes to incorporate Gmobile, to be in repeated violation of the BVI’s anti-money laundering law between 2003 and 2008.

Thomas Ward, a co-founder of CTL who has worked as a consultant to the firm since it was sold to the new owners in 2009, said the company worked hard to make sure it didn’t take on shady clients.

“We believe we chose our clients carefully and we believe they honoured their agreements with us,” he said. But at times CTL’s staff was “either deceived or previously honest customers changed.”