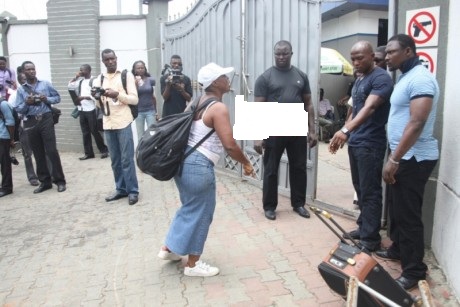 Pastor Chris Oyakhilome Is Under A Spiritual Attack – Church Members

As the world awaits the outcome of a divorce suit filed in a Lon­don court by Rev Anita seeking the dissolution of her marriage to Pastor Chris Oyakhilome, members of the couple’s Christ Embassy church appear not ready to believe the report until their General Overseer lays the facts bare before them.

Some members, who spoke with Saturday Sun, argued that it is only when Pastor Chris personally issues a statement admitting the divorce before they believe media reports on it. Others believe that the family, which is under a spiritual attack by the devil, needs their prayers to overcome.

Saturday Sun correspondent, who visited the church headquarters in the Oregun area of Ikeja during their Wednesday weekly service, observed that the church was still filled to the brim. The crowd, which was made up of mostly youths, started pouring in at about 6.30pm.

The service started with a brief dialogue on the special praise and thanksgiving service that would hold tomorrow, Sunday. The pastors took turn to explain to members on the need to attend the service, with a heart full of praise.

Next was the praise and worship session. During the brief session, an elderly woman who sat nearby could not help but hiss out aloud at the sight of the pretty female lead singer who was in tight jeans and a jacket that is far above her hips.

“These are the ones distracting men of God. Can she wear this to an office on a Wednesday? Take a look at the faces of members of the church especially the youths. They are all smiling. They are excited at her complexion and shape and not the angelic voice. Tomorrow, someone will accuse pastor of adultery,” she said with anger written all over her face.

She, however, heaved a sigh of relief when the female pastor, who was to deliver the sermon, stepped out and ended the praise and worship. “Is this woman not also pretty? Can’t you see how decently she is dressed”, she asked nobody in particular.

Obviously offended by her analysis, a young pretty lady also seated by her side, advised the woman to listen to the word, not the messenger. “What is your business? This is how she chose to dress to be comfortable on stage. Most of those well dressed, according to your interpretation, are the worst sinners on earth.” The little argument attracted an usher who pleaded that there should be silence.

Dwelling on the topic, Essence of Praise, the female pastor enjoined members not to be deterred by the challenges of life. She harped on the fact that there are bound to be temptations that could divert the thoughts of Christians on the need to be grateful to God for the past as it will pave the way for God’s blessings.

After the service, members in the church were seen in groups debating issues among which is the scandal rocking the church. Majority of those, who chatted with Saturday Sun, dwelt on the fact that they are in church to worship God and that even if Pastor Chris is guilty, they will still stand by him as he is only human.

At the refreshment stand, the owner of the shop lamented that Nigerians, especially the media, should learn to mind their business. “We are patiently waiting for the return of our pastor and we hope that he would address this issue. I am not here because of any man but to worship God. I joined the church after they visited my area to distribute Rhapsody of reality booklet. They have a human face unlike other churches that dwell on what they will gain from members. You can see that most members of the church are youths, who have little or no source of living. All they need is prayers and I know that they will surely overcome because Pastor Chris preaches against divorce.”

Another member, who later bought a can of coke, said: “It’s a lie. Until Pastor Chris returns and addresses the church on this, I will treat it as a mere rumour. This is why I came to church on Wednesday. I need to hear from him on the pulpit before I believe. Most especially, Rev Anita has not said anything. If they cannot pull down Pastor Muoka of the Lord Chosen, no one will pull Pastor Chris down.”

At the female rest room, the story is the same, one of the cleaners begged that members should mind their business. “Please, you people should learn to mind your business and wait for the pastor to return. If the church stops to exist, some of us will lose our jobs. It’s high time they stopped all those beautiful women travelling about with him. No one will see such and not assume that he is having an affair with them. If he had chosen me as his PA, no one will imagine that Pastor Chris will look my way,” the cleaner jokingly said, showing off her tiny body at the amazement of the ladies in the rest room who laughed out loud.

At the car park, the gist remains the same, one of the members, who was disappointed that Pastor Chris was not in church, accused his wife of peddling wrong information. “I told you to be sure that Pastor Chris will be in church and you can see the result. I thought you said that he is back in the country. Get your information right. “Laughing at her husband’s outburst, the lady pleaded that she was sorry. “Darling, am sorry. Shade told me that the pastor will be in church today.”

Why the sudden urge to see him, the reporter asked openly. “No big deal, it’s just that I must be in church the day he will address the church on this matter. I need to know which of the female pastors that was accused. I don’t trust them, if not for praise and worship, this scandal is enough for me to return to Catholic Church,” he said, laughing out loud as they drove off.

Hahahaha madam Aproko reporter u no go kill us ooooo.

How she come get all these information, is she everywhere at the same time. Abi dem dispatch battalion of reporters there LOL.