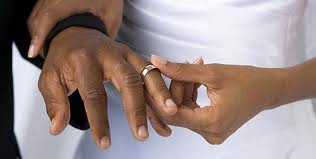 Pastor Goodness Enemchukwu of Jesus World Church in Lagos has filed for divorce from his wife of 26 years, Augustina Enemchukwu. naijagists.com

The pastor got his request granted on Friday when a Lagos Customary Court presided by Mr Adewale Eko declared the couple were no longer husband and wife as all effort of the court to save the marriage failed.

The pastor accused his wife, Augustina, the mother of their 7 children of lack of support for his ministry and disrespect.

“This court has no choice than to dissolve the union, in spite of the fact that the wife still claims she loves her husband. The parties are free to go their separate ways,’’ the presiding judge ruled.

He said that the first three children of the marriage, aged 25, 23, 21 were old enough to decide where to live.

” The custody of the remaining four children, who are under age, is hereby referred to the Family Court,” he said.

The court ordered Goodness to allow Augustina to enter his house and pack her belongings in the presence of some court officials and policemen.

Eko also ordered the cleric to pay N100,000 as rehabilitation cost to Augustina, and N10,000 monthly for the upkeep of the children.

Goodness, a pastor of the Jesus World Church, filed for divorce on 4 September.

“My wife is giving me a tough time; she does not respect me, she fights me and rains curses on me,’’ Goodness told the court.

He claimed that Augustina refused to support his ministry, and that she discouraged worshippers from coming to the church.

“Because of her troubles, I had to leave the house for her and move to the camp,” the pastor, who resides at Okerube, a Lagos suburb, said.

He prayed the court to dissolve the union to enable him to forge ahead in his pastoral work.

Augustina denied the allegations, saying that she has been a submissive wife.

She accused Goodness of womanising.

“About six members of the church have called me on phone, telling me to warn my husband. I told him to stop disgracing God and turn a new leaf, but he refused,” she said. (pm reports)