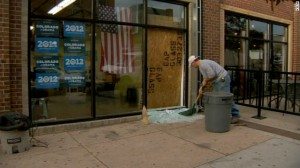 An unknown gunman on Friday Oct 12, 2012 attacked the campaign office of US President Barack Obama in Colorado. naijagists.com

The shooting left a window shattered with no injuries reported.

According to a police spokesperson, Raquel Lopez, it looks like it was one shot that was fired into the structure.

Staffs were busy working in the office at the time of the attack.

Police are still on the hunt for the attacker.