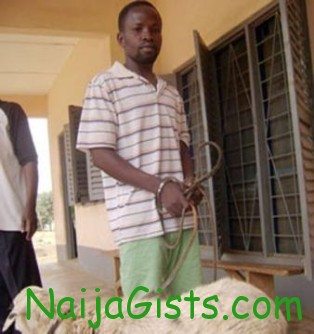 Pastor Oloruntoba Ibitoye has been jailed for 9 months for allegedly stealing a sheep valued at N3,000 at the owner’s residence in Ilorin, Kwara state, Nigeria. naijagists.com

According to Sun Online, Pastor was charged before an Ilorin Magistrate.

According to the prosecution, the complainant, Mrs Florence Adebiyi, reported at the police station in Ganmo, near Ilorin, that the convict stole her sheep valued at N3,000 in front of her Amoyo residence.

The prosecution said the sheep was recovered from Ibitoye by the police.

He pleaded guilty to the offence and begged for leniency.

Police prosecutor, Inspector Mojisola Olamokun, applied for summary trial, which was granted by the court.

The Magistrate, Mrs. Mariam Qudus-Salahu, sentenced him to nine months imprisonment without an option of fine.

Recall that just last month, Daily Sun published series of reports of the exploits of some pastors.

A pastor, who allegedly led a four-man robbery gang, was arrested.

The suspect, Adedeji Ojo, who is in his early 30s, in his alleged confessional statement to the Oyo State Police Command, said: “I didn’t tell my wife that I am an armed robber. I lied to my wife that I wanted to go for night vigil. My wife always thought I was in the church at night.”

Also, a man who claimed to be a pastor and a prayer warrior, 34-year-old Tunde Adeyinka, was arrested by the state police command for allegedly leading an eight-man robbery gang that terrorised residents of Ogbomosho, Oyo State.

Adeyinka was nabbed a month after his wedding.

The Area Commander, Pat Ezeani, told reporters that he had received several complaints on the suspect.

Adeyinka said: “I am an armed robber and have got involved in many robbery operations in Ogbomosho, Shagamu and Lagos. It was part of the money I got from operations that I used to finance my wedding.

“I have my prayer office at Papa Ajao, Ogbomosho, where I pray for people.”

Their so-called Islamic counterparts, Fatai Bamidele and Lateef Ahmed, have also been detained by the Special Anti-Fraud Unit (SFU), Lagos for allegedly swindling one Lawal of N30 million.

Lawal said he fell for the N30 million scam because he trusted Bamidele, whom he described as his mentor.

Ahmed, however, disagreed, saying it was only N10 million he collected from Lawal.

“It was only N10 million that you brought and I gave my colleague N2.5 million and I used the rest to perform rituals for you.”

Narrating his ordeal, the victim alleged that he had known Bamidele for years as his mentor and Islamic cleric, who was praying for him and that because of the trust he had in him, he used to share his problems with him.

He said he was afraid when Alfa Bamidele phoned him, telling him he had a very terrible dream about his family.

Lawal said: “As a cleric that I used to respect, I asked him what his dream was and he told me that if I did not perform some rituals, my family and I would soon die.”

Lawal said he inquired what the ritual would involve and Alfa Bamidele told him that he needed a ram and other materials, adding: “I eventually gave him N175,000 for the ritual.”

But Bamidele said that he needed to take him to another powerful Alfa in Ilorin, for more spiritual cleansing and powers.

He said since he believed Bamidele to be a true man of God, he did not hesitate to follow him to Ilorin where he introduced him to Alfa Ahmed.

According to Lawal: “When we got there, Bamidele brought out a portion of meat, which he claimed was the heart of the ram he used in performing a sacrifice for him.

“The two Alfas commanded me to eat the meat before further spiritual cleansing could take place. I ate the meat and that was my greatest undoing. Immediately I ate the meat, I lost my senses and they started asking me to bring money for one ritual or the other.

“It was when I exhausted the sum of N30 million given to me by my elder brother and other customers who were buying fireworks from me that I regained my senses.” (sunnews)