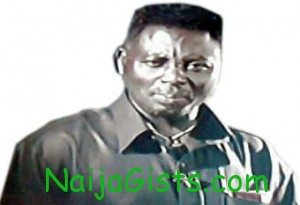 The founder and Pastor of Kingsway International Church, Pastor Mathew Asimolowo is currently not enjoying the best of health if feelers reaching Global News are anything to go by.
Those in the know claimed that the televangelist is battling an ailment which nobody can define particularly, though some people in his fold say it is diabetes. naijagists.com

Based on the information received from one of the church members, the pastor, for some time had been elusive, with nobody except his close aides and top church members knowing his whereabouts.
However, after some time he showed up but he was not his usual self: he was so lean and frail, which prompted many people to ask what might have gone wrong with the once chubby man of God.

Those close to the church claimed that many members didn’t know the type of ailment Asimolowo is suffering from because it was shrouded in topmost secrecy. But further probing revealed that the man is allegedly suffering from diabetes.
Diabetes is a metabolic disorder that is characterized by high level of glucose in the blood. The classic symptoms are excessive thirst, frequent urination, constant hunger, poor eyesight and tiredness.

Pastor Asimolowo is one of Nigeria’s most flamboyant pastors and he is listed among the top five richest pastors in the country. He got himself into trouble sometime ago in London when the British government ordered him to pay back £200,000 (about N52 million) fine when he was found guilty of misconduct and mismanagement of the church money.
He was also accused of using the charity’s credit card to buy a £12,000 timeshare in Florida and running a commercial business from church premises. Among benefits he received was a £120,000 birthday gift, of which £80,000 went on a Mercedes and his family lived rent-free in a house owned by the charity.

May the Lord give him sound health.