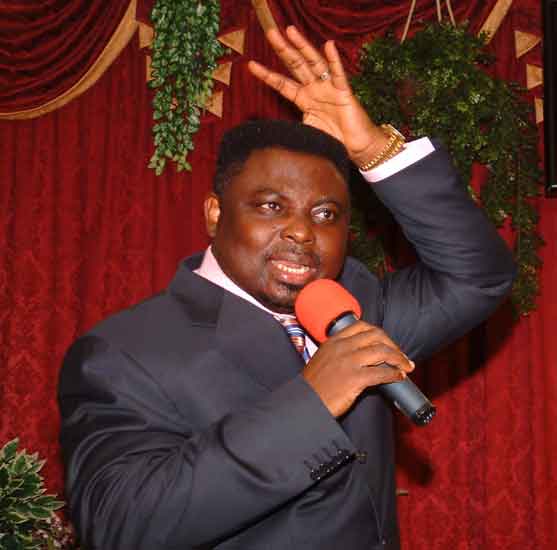 In a brief chat with Sunday Sun, Pastor Mathew Ashimolowo, the founder of Kingsway International Christian Center, KICC in London said God spoke to him about Nigeria.

Ahsimolowo said Nigeria is not winning the war against Boko Haram because the terrorist network is being sponsored by 5th columnists (People willing to cooperate with an aggressor against their own country).

He however said God will soon raise a leader that will turn around the destiny of Nigeria.

We are in the New Year. Nigerians would like to know what God is saying to us as a country. Do you have a mes­sage for Nigerians?

Very interesting. I believe that globally, there is going to be a shaking of the world. There will be earthquakes in some places. There might be famine in places they never knew famine, and flooding in places they didn’t expect. For Nigeria, the Lord showed me, who will win the election. I will not men­tion his name, because I have to be politically neutral. But when the president’s name is an­nounced, 20 percent of a certain part of the nation will not agree. Eventually, after ne­gotiation they will. We will agree that we’re one. Wales is only 400,000 people or about a million people.

They call them a nation, and they call Yorubas who are 27 million a tribe, the Igbo who are 18 million you call them a tribe. For us to have many nations that make up Nigeria, it was God that made it happen. And that prophetic mandate still remains on Nigeria. Anyone who incites people to di­vide this nation will lose his chance. Nigeria will remain one. After all the noise, you will be amazed that also some politicians will be shocked, nobody will be ready to die for them. There will be peace in Nigeria after the elec­tion. I see a man who will one day rise, but I don’t know when, I don’t think it’s up to 10 years though . He will turn the fortunes of Ni­geria round. Nigeria will look like one of these advancing nations like United Arab Emirates , India, and China. That is how Nigeria will be.

You said there will be peace, what about Boko Haram insurgency?

Boko Haram is a snake with many heads. We are cutting one head, which is why the other head shows up. If you know the hydras in the story of Hercules, every time the head of that snake was cut, two heads grew there. We need a robust approach. Boko Haram will still be around but we need a robust approach. We need to deal with fifth columnists in the sys­tem who are empowering them. I am 62 years old. I was born in the barracks and I know when Nigeria fought the civil war. My father fought the war too. In fact, he died in Biafra. He died by the Asaba bridge. But I can tell you, in Nigeria, there were only five battalions when Nigeria fought the three-year civil war and yet the war came to an end. It was mas­sive. How can you fight a bunch of riff-raffs with the army and they hold you to ransom? Fifth columnists are selling Nigeria to them, giving them petrol, money and ammunition. As my mother used to say, when a child keeps throwing stones and he’s not exhausted, there is a supplier in the corner. But our prayer should be that our government will be bold enough to indict the fifth columnists, either inside the system or outside the system.

Do you think foreigners are backing Boko Haram?

The only foreign aide in my opinion to Boko Haram are weapons from Libya during the revolution. They came down south. Other than that, it will be people who believe in the advancement of the religion of Islam but do not realize that in the process they are funding the wrong people.