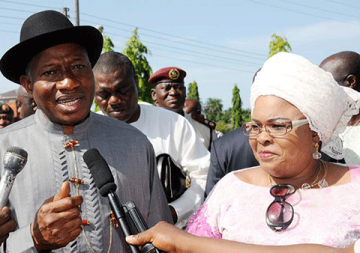 A Bayelsa-based lawyer, and the spokesperson for PDP, Osom Makbere has blamed President Jonathan’s defeat on the troublesome attitude of his wife and the negative impact of international and domestic conspiracies.

Makbere blamed the overbearing attitude of the outgoing First Lady, Patience Jonathan for her husband’s defeat.

“History has stated that no failure, defeat or loss is a product of a single factor. Jonathan’s loss could be blamed on a multiplicity of interwoven causes.

“The strides made in the economic sphere, especially domestic rice promotion, calculated by the Jonathan administration to flip economic growth, and boost import substitution, also negatively alerted the West. The shift to China for our railway transformation, and recently, the migration to Russia for arms and ammunition to quelling the insurgency also signalled to the West that Jonathan had started constituting a self-reliant and dependent nation-state, a feat seen too tall by the US and their allies in the West.

“The aforesaid international factors found room to flourish given the obstinacy and impudence on the part of Mrs. Jonathan. The end result of her personal ambition to plant ‘self-made’ governors triggered face-offs with some governors.”