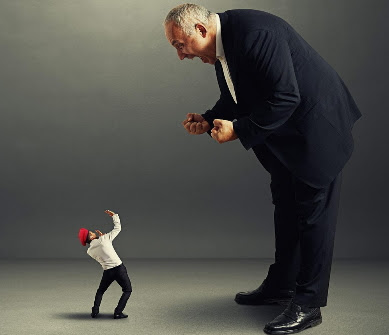 “A leader is admired, a boss is feared”-Vicente del Bosque

In actual sense, people don’t leave bad companies, they leave bad bosses! Toxic bosses are the greatest liability to an establishment and even worse than fraud! Employees leave bad bosses and the companies that allow the bad boss to thrive. A bad boss can prevent a new generation of dynamic and enterprising employees from emerging. There is nothing that kills dynamism, exterminate a ‘new generation’, and poisons change than a bad boss! We are living in a time where bad bosses are more prevalent than ever.

According to a survey conducted by an International Association of Administrative Professionals, a bad boss is the NO.1 reason employees quit. The greatest threat to a company’s culture is a bad or toxic boss.

The debilitating effect of a bad boss cannot be quantified as the time spent counseling, appeasing, consoling victimized employees, reorganizing departments or teams, and arranging transfers as an aftermath of the strain with bad bosses and managers produce significant hidden costs for the company.

Often talented individuals are forced to job-hop from one company to another in order to have a new lease of life. I have always said it that the greatest job of a leader is to create the right environment. When the environment is conducive, growth, fulfillment, and productivity are almost automatic and even inevitable. In recent times, turn-over rates in companies have become unprecedentedly appalling. When you spend so much money and resources to train your employees and the end result is their exit, then it is high time you reviewed the leaders and managers; they might just be the reason for the unhealthy exodus!

Working for a bad boss is the worst kind of mental and emotional abuse. Infact, it has been observed that the relationship between an employee and his boss is responsible for major breakdown in families, friendships, and even personal identity. Most stress and arguments in families and relationship are simply an outflow or aftermath of a resentful and unfulfilled relationship between an employee and his boss! Since the employee or victim of a toxic boss cannot vent his anger on his ‘punisher’, he is forced to look for other platforms where he can easily transfer his aggression; in most cases the family is normally the recipient!

On another side, reviews and studies have shown that bad bosses can actually make employees sick! It is a concluded study that the longer you stay in a job working for someone who stresses you, the greater the damage is to your physical and mental health. Recent data from the American Psychology Association shows that 75% of American workers believe their bosses are a major cause of stress at work.

Swedish researchers, led by Anna Nyberg at the Stress Institute in Stockholm, have published a study in the Journal of Occupational and Environmental Medicine on the issue of leaders’ behavior and employee health. They studied more than 3,100 men over a 10 year period in typical work settings. They found that employees who had managers who were incompetent, inconsiderate, secretive and uncommunicative, were 60% more likely to suffer a heart attack or other life-threatening cardiac condition.

By contrast, employees who worked with “good” leaders were 40% less likely to suffer heart problems.  Nyberg said, “For all those who work under managers who they perceive behave strangely, or in any way they don’t understand, and they feel stressed, the study confirms this develops into a health risk.”

One of the success story of the internet giant-Goggle Inc-is their constant culture of systematically ‘flushing’ out bad bosses or what they have now come to term as ‘A Jerk in the workplace’. Goggle’s “no jerk” policy has so much ensure that toxic bosses don’t stay or even find their way into the company.

In the article, “How bad bosses can make you sick”, Ray Williams said, “A jerk in the workplace is defined as someone who oppresses, humiliates, de-energizes or belittles a subordinate or a colleague.

Bad bosses come in different forms and shades, which is actually the object of this piece. What are those things that bosses do to drive their employees beyond the edge?

UNHEALTHY EXPECTATIONS: A good boss set expectations high enough to stretch us but healthy enough not to break us. Expectations are meant to stretch and not break us! It is good to have high expectation of others, but it must be complementarily healthy or else it becomes toxic. Unhealthy expectation strains the working environment. It makes others look as if they are incapable. We must allow people to grow at their own pace.

OLD WAYS: Old ways won’t open new doors! Albert Einstein said, “Problems cannot be solved by the same level of thinking that created them”. We can play ‘old school’ with our culture, but it must never be with our methodologies and ideologies. Managers that have unyielding penchant for adhering to old ways normally frustrate dynamic employees and change gladiators. Thomas Edison once said, “There is always a better way; find it”. Bad bosses are always inimical to change and even demoralize employees with revolutionary thought patterns.

FAULT-FINDING: Toxic bosses are always looking out for faults in others. They have a keen eye for faults and are psychologically blinded to the ‘goods’ in others. There is no man that is flawless, and when we embark on a diligent search for faults in others, we will ultimately find it! It is ironic to know that most times, fault-finders are actually part of the problem, or even worse-they are the problem! As the Dean of School of an educational establishment in Nigeria, I have come to realize that people don’t give their best when they feel you are monitoring them to find fault in them!

Mahatma Gandi said, “Freedom is not worth having if it does not include the freedom to make mistakes”.

Mistakes are integral part of the learning system. When employees make mistakes which they will always do, we must encourage them to learn from it.

Mistakes though can be costly but can also be used as a spring board for innovations.

Denis Waitley said, “Mistakes are painful when they happen, but years later a collection of mistakes is what is called experience”.

PUTTING THE RIGHT PEOPLE IN THE WRONG PLACES:

Myles Munroe once said, ‘’To know the right places for people, we must know their area of gifting”. It is pure frustration when you keep putting people into roles that is not in tandem with their gifting.

The easiest way to under develop people is to place them into departments that is not putting a demand on their talent and creativity.

A good manager consistently do what is called ‘strength analysis’ and ensure that employees are rightly placed where their gifts, talent and expertise can be maximally utilized.

LACK OF TRAINING AND DEVELOPMENT:

An untrained staff is a liability! No matter the level of incompetency, consistent training will always make a difference! Henry Ford once said, “The only thing worse than training your employees and having them leave is not training them and having them stay”.

You don’t build a business, you build people, and then people build the business. It is only a bad manager that expects the best from the employees without training them.

NEGATIVE BOSSES: Positivity fuels productivity. Some leaders are only skillful in pulling others down. They lack the ability to encourage and empower others.

Tom Ziglar said, “Negative people don’t want solutions. Solutions mean they have to work to find something else to be negative about.”

Some toxic bosses have eyes only for what has gone wrong without taking time out to really appreciate countless efforts and sacrifices from their employees. A negative boss is the worst ‘environment’ in any work place!

AUTHORITARIAN BOSSES: These are very toxic bosses that seldom listen to the views and opinions of their employees.

Andy Stanley said, “Leaders who don’t listen will eventually be surrounded by people who have nothing to say.”

Great leaders value feedbacks and criticism. Leaders who surround themselves with people that say only what they want to hear are headed for a journey into oblivion.

OVER BEARING, CONTROLLING AND POSSESSIVE ATTITUDE:

Bad bosses can be stifling and over bearing! Great bosses must give their employees breathing space, and the privilege of not having the superiors always breathing down on their neck every time. Many times, we need to give employees platforms to be themselves and nurture their individualities.

A possessive boss acts as if he owns people, you don’t own people! Creativity and innovation needs space. Everybody is entitled to have his own experience and space, and when we deny people this ‘privilege’, it stifles personal growth and experience. People are meant to be accommodated and not controlled; if people were meant to be controlled, they would have come with a remote control!

BLAME STORMING AND NOT BRAINSTORMING: Some toxic bosses don’t ever have compliments to throw at people, the only thing they throw is ‘blames’. The most malignant ones can even make you believe you are unworthy, incompetent, and even unlovable. It is very obvious that employees will always come with their load of strength and weaknesses; a bad boss overlook the former and focuses on the latter.

Great bosses utilize employee’s strength while working on their weaknesses. While I agree that employees weaknesses must not be trivialize, they must not also be the object of our focus. Brainstorming attacks the problem by evolving viable solution while blame-storming evades the problem and attacks the person. It kills initiative and reduces people’s morale. I have come to realize that when we truly brainstorm, we will have less time to blame-storm!

VALUING CUSTOMERS MORE THAN THE EMPLOYEES:

While customers ensure profitability, employees ensure sustainability. Clients do not come first. Employees come first. If you take care of your employees, they will take care of the clients. A person who feels appreciated will always do more than what is expected. Toxic bosses are never grateful; they seldom say the words ‘Thank you’ to their employee.

MAKING BUSINESS MORE IMPORTANT THAN FAMILY: Family is everything! A good boss will ensure that you don’t sacrifice family for business. The easiest way to win employees is to show deep interest in their family and welfare. A toxic boss stretch employees to the detriment of their family and leisure. Employees will always accomplish more when family is priority.

The greatest gift you can ever give your employees is the gift of a ‘good boss’. In order to make working environment more productive, fulfilling, and lively, we must ensure that executives and managers have positive and healthy relationships with employees.

The cost of a bad boss is not only too expensive; the damages are mostly irredeemable.

Napoleon Bonaparte said, “A leader is a dealer in hope”.

The true essence of leadership is in firing up people’s morale to achieve common and audacious goals. CEO simply means Chief Encouragement Officer!

“An employee’s motivation is a direct result of the sum of interactions with his or her manager.”-Bob Nelson

Take Ownership Of Your Life And Be The Lead Actor In Your Own Story!
What You Drive Is Not As Important As What Is Driving You!