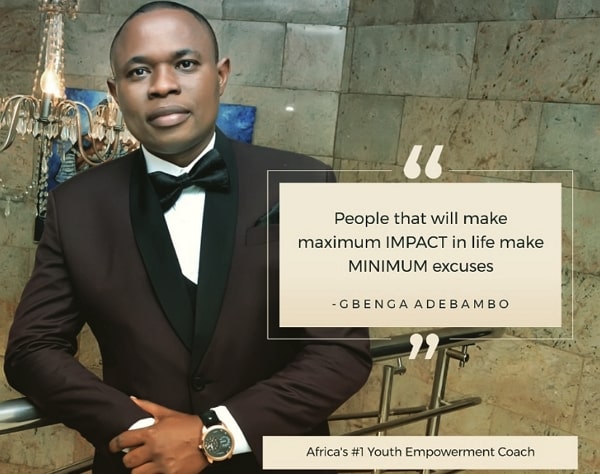 In life, the winning side has result while the losing side has excuses. Champions make adjustments, not excuses. Until we cultivate the habit of living above our excuses, we will continue to live inferior lives. George Washington Carver said, “99% of failures comes from those who have a habit of making up excuses.” In order to influence your generation, you will need to quit excuses to live a life of impact; quit making excuses to live the life that you want. Excuses will always make you feel better at the present but makes your future bitter!

It is easier to go from failure to success than it is from excuses to success. So many people, by rejecting and excusing themselves out of taking responsibilities, have actually eliminated themselves out of any opportunity to grow. Each time you make excuses, you kill an opportunity for growth. People that make excuses never reach their full potentials. Excuses lead to a failure in reaching your full potential. One major evidence that a man is depreciating in value is an increase in the frequency of his excuses. When you make an excuse, you aren’t even giving yourself a shot to succeed, which can limit you in every area of your life. You may never even know what you’re capable of if you have an excuse for everything that comes your way. Excuses can hold you back from a lot of things, including getting further in your career, getting healthier, and creating new relationships.

I have observed one major difference between the poor and the rich – The poor have more faith in their excuses than in their result; the rich have more faith in their results than in their excuses! Mark Rebel said, “Success occurs when your dreams get bigger than your excuses. Make time, not excuses.” The major step towards maximizing your impact is to minimize your excuses. Mistakes are committed by strong people and weak people as well, the only difference is that strong people admit their mistakes whereas weak ones look for excuses. There is something very dangerous about having penchant for making excuses – one day it will make you miss a critical opportunity that is significant to your destiny fulfillment.

Pope John Paul II said, “An excuse is worse and more terrible than a lie, for an excuse is a lie guarded.” Sometimes, even when you have good excuses, don’t use it because nobody is impressed with how good your excuses are. Don’t ever forget that people pay for services, not for excuses. When you refuse to make excuses, you make something incredible happen in your life. Don’t make excuses, make things happen.

Excuses are lies in disguise. Benjamin Franklin said, ‘’I never knew a man who was good at making excuses who was good at anything else.’’ One thing that will consistently get on your way to success is your excuses. Every excuse you make pushes you further away from your goal.  Make yourself stronger than your excuses. You will need to quit making excuses to live a life that you want. G.M Travelyan said, “The best job goes to the person who can get it done without passing the buck or coming back with excuses”. Excuses allow us to justify our lack of progress, but it will never get things done.  They can bring you sympathy or even let you off the hook, but the truth is, when there is something you were meant to do, you’ll never truly be off the hook.  You must do it, which means you must let go of your excuses.

Each time you make excuses, you are empowering your inability to do that thing! Excuses are tools for the incompetent, and those who specialize in them seldom go far. There are two things you can either make in life: it is either you are making excuses or you are making progress. In life, it is impossible to give excuses and still have results. Someone said, “When I lost all my excuses, I found my results.” When people start giving so much excuses, it is a clear signal that they will not have result. You can have result or excuses not both.

Soichiro Honda was a Japanese engineer and industrialist; he spent his early childhood helping his father who was a blacksmith with his bicycle repair business. Right from childhood, he had been thrilled by the first car that was ever seen in his village and never forgot the smell of the engine oil the car gave off. Honda in his quest to follow his passion, left home for Tokyo to look for work at the age of 14. He obtained an apprenticeship at a garage in 1922 where he eventually stayed for 6 years. He worked as a car mechanic before returning home to start his own auto repair business in 1928 at the age of 22.

By the year 1937, Honda had already founded a company ‘Tokai Seiki’ where he was producing piston rings. His plan was to sell the idea to Toyota. He labored night and day, even slept in the workshop, always believing he could perfect his design and produce a worthy product.

Finally, after going through the rigor to produce the rings, it was rejected by Toyota because the rings did not meet their specification standards. But his resilience will not allow him to give up and after some years of redesigning the piston rings, he finally won a contract with Toyota.  Soichiro worked tirelessly to build a factory in order to enhance his supplies to Toyota. It was a Herculean task because Japan was in the middle of the World War II and building materials were relatively short in supply. He eventually surmounted the challenge by inventing a new concrete-making process that enabled him to build the factory.

Tragedy struck when his factory was bombed twice and steel became unavailable and instead of attaching his excuses to the unavailability of steel due to the war, he instead started collecting gasoline cans discarded by U.S fighters which became the new raw materials for his rebuilt of the manufacturing process. He was undaunted in the face of this human disaster called world war II and rebuilt his factory but then natural disaster struck (an earthquake) and his factory was destroyed!

Robert Brault said, “Success is a tale of obstacles overcome, and for every obstacle overcome, an excuse not used”. For Honda, no excuse was tenable and his passion was definitely unshaken even with the devastating events that thrashed all his efforts. Honda sold the remains of his company to Toyota and used the proceeds to fund the Honda Technical Research Institute in October, 1946. After the World War II, an extreme gasoline shortage forced people to walk or use bicycles. Honda’s keen eyes for technology led him into building a tiny engine that can be attached to his bicycle. Due to the shortage of materials after the war, Honda rallied 5000 bicycles shop owner around Japan to help him revitalize their country. With success in Japan, Honda began exporting his bicycle engines to Europe and America.

Soichiro Honda founded his company, Honda Motor Company in 1948 and started working towards cheap and versatile cars. In the 1970s, Honda developed a small version of his engine, and the company started making tiny cars.  This gave the Honda Company a major breakthrough in the automobile world.  Honda ranked as the 5th largest automobile manufacturer in the world.  The Honda brand has become synonymous with usefulness and innovative engineering. Honda oversaw his company’s expansion from a car mechanic to a wooden shack manufacturing bicycle motors to a multinational automobile and motorcycle manufacturer. Though the challenges were enormous but Honda’s excuses were minimal. He showed the world that excuses are for people who don’t want it bad enough. Soichiro Honda, a man of maximum impact, a man of minimum excuse!

We really need to understand that we can’t create while we are complaining and making excuses. In fact, complaining drains innovation and initiatives. Stop whining and start winning. If you keep complaining about the African environment, you will always be frustrated by your result. I implore the youths to take ownership and responsibility for their lives by taking actions and not giving excuses. A French Proverb says, “Justifying a fault doubles it”. Develop a mindset that has zero tolerance for excuses. Hold yourself responsible for a higher standard than anybody else expects of you, never justify a fault with an excuse.

QUOTE OF THE WEEK: “Excuses are the tools with which persons with no purpose in view build for themselves great monument of nothing”- Steven Grayhm

Continue Reading
You may also like...
Related Topics:make maximum impact in life

Accessing Breakthroughs Via Kingdom Stewardship!
How To Discover Happiness From Within