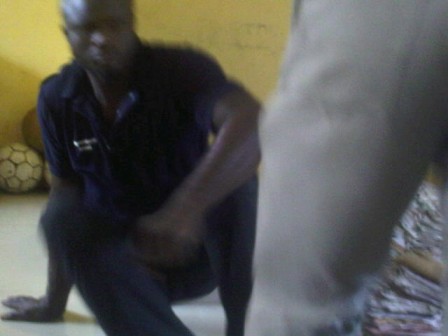 4 days after he was employed as a private driver, a 32-year-old man, Kolawole Atoyebi, has been arrested for allegedly robbing his employer, Mrs. Beatrice Nwaokun in Lagos State, western Nigeria.

He was charged before Isolo Magistrates’ court on Wednesday by the police at Ikotun division.

The incident happened at 15, Nnamdi street, Egbe Ikotun where Nwaokun resides.
The kwara State-born Atoyebi, who resides at 27, Malas street, Liasu, Ikotun, was employed by the victim as a private driver.

Four days after the 29 December, 2015, Atoyebi was employed, he had already duplicated the keys to the four bedroom flats of his employer to achieve his desire.

Atoyebi allegedly actualised his plan when stole N385,000 kept in Nwaokun’s bedroom and escaped.
When Nwaokun discovered the missing money, she went to the police at Ikotun division and reported the matter.

Atoyebi was arrested and was found with the duplicate of the keys to the whole apartment.
At the station, he confessed and pleaded for time to refund the money.

He was charged to court on a three-count criminal charge of breach of peace by duplicating the keys, infringement of the victim’s privacy and stealing under the Criminal Code.

When he was arraigned, he pleaded not guilty and the presiding Magistrate, Mrs A.K. Shorunbi, granted him bail in the sum of N200,000 with two sureties in like sum.

Atoyebi was remanded in prison custody at Kirkiri pending when he will perfect his bail condition.
The matter was adjourned till 13 January, 2016.