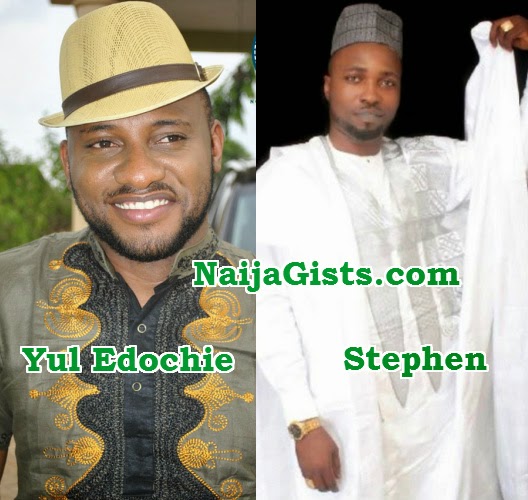 Popular Nollywood star Yul Edochie, the son of veteran actor Pete Edochie is currently struggling to get rid of a long-distance gay stalker, Stephen Ogochukwu disrupting his peace of mind.

This past month, Yul took to the social media to inform fans that a gay man was stalking him.

In an exclusive chat with Saturday Beats, the actor narrated how the gay saga started.

“This guy contacted me through Facebook and told me he was a homosexual. I told him that I was not gay and a few weeks later, I started getting calls from a Canadian number. When I first picked his call, he told me that his name is Stephen Ugochukwu and he was the one that reached me via Facebook. He told me that he had some friends in Nollywood that could get him any number he wanted.

“Shortly after, he started calling me very often to the extent that I started blocking all his lines but it only worked for a short while. He called with a strange number again and told me that he went on the internet to learn how to call somebody with any number he liked. I blocked about 20 of his numbers but he kept calling. He said that he just loved me and that he was a big fan. He said that he just wanted to be my friend and I said okay. I told him that I am not God and I don’t discriminate against people. I told him that it was his business if he was gay.”

“He said that he knows that I am not gay, promising not to tell me anything about it again and to show that he meant it, he swore with God’s name and even his parents’ name. He said that he resides in Canada and does travel documents for people who want to come over. I have phobia for flights so I don’t travel by air quite much. I told my wife about his offer of Canadian visas and she consented to it. She said that she had always wanted to do Canadian visa for our children, so she said I should give it a trial. As usual, when the guy called me, I told him I was not interested but that I would link him up with my wife. He once again swore with his life that he would not disturb me about being gay. I gave him my wife’s number and my PA’s number so they could keep in touch all through the visa acquisition period,”.

“After everything, he called me and said I should send him a picture of my manhood, saying that’s all he wanted. That was where all the trouble started. I told him that I could not do such and his calls tripled. I told him to leave me alone because God has blessed me to an extent where I can take my family anywhere they want to go. He started telling my wife that he was in love with me. At a point, he started calling my wife because he noticed that I was not picking his call and at that point, I had changed my phone number. When he noticed that I was not moved, he started disturbing my wife to persuade me to talk to him and stop snubbing him. He said that he did not create himself and it was God that created him that way. I noticed that whenever I talked to him, he would be calm but when I didn’t, he went mad.”

“That was how I was tolerating him for a while. He would call me, he would tell me that he knows I am not gay but he would want to see my ‘beef’. In order to make him stop disturbing my wife, I would tell him that he should not worry, I would send the picture to him the following week. He would thank me and would not disturb me and my family till the following week. Exactly a week after, once he calls and I don’t answer him, he would start disturbing my wife again. It is very crazy.

“When he found out that I was no more bothered about his calls, he went to attack me online. Whenever a fan tweets at me, he would get the person’s picture, photoshop it with some other nude people’s pictures and post it on the internet. After sometime, he did the same thing with my wife. He took her picture, photoshopped it with that of some naked men and women and posted it on the internet. When I picked his call and challenged him, he said that it was not his fault because I promised him I was going to show him my manhood but I did not show him again. I told him to leave me alone and find someone in Canada because the country he is in supports such but he refused. He said that it must be me because he is in love with me. He would take my picture and write, “Yul please love me back, Stephen.” He sent me all sorts of rubbish. He started threatening me that he would dent my image. He took our documents that we sent to him and started posting some of my personal information online. I never believed that a human being could act in such a manner. He said that since I was proving stubborn, he would make sure he destroyed my name and ruin my popularity,” he said.

“It was exactly the same thing he said he had done to some actors I cannot mention their names. Somebody he has done it to had to open a social media account, “steveugoisafakegayboy”, in order to fight him back. This thing he is doing to me, he has done it to several people. This same thing he said to me, he has said it to the others, so they posted the conversation on the page. I did not know that he had done it to other people till my case was getting out of hand and I began talking to people. It was then that I learnt that they know him very well. If it were just me, I would have left him. But because he got my family and fans involved, I had to do something.

Till now, he still disturbs me. I told his mother to warn him. Maybe his family knows about it because I thought all this would stop after talking to his mother. If I decide to go after the young man, he would go to jail because I have proof. At this stage in my life, why would I start looking for a man to sleep with, is that not madness?” Edochie queried.