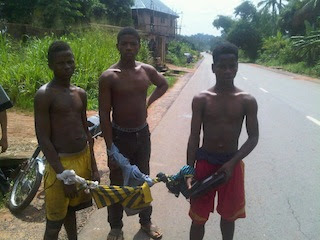 A young boy arrested with 2 other accomplices after robbing a church in Anambra state has confessed.

Kosi Ebosie, 15-year-old armed robbery suspect was arrested on Tuesday in Umuchu town in Aguata LGA of Anambra. He told police that he inherited the trait from his dad who is a notorious robber in the area.

He said his family members are not surprised as they used to hail him for resembling his father who always take what didn’t belong to him.

Ebosie was arrested along with 2 members of his robbery gang, 17-year-old Chima David  and 16-year-old Onyedika Ikesinachi from Imo State after robbing St Andrew Anglican Church in the early hours of Tuesday.

Luck ran out of them after vigilante and youths in charge of security in the area arrested them.

A source in the area said Anambra Police officials are worried over incessant robbery attacks being carried out by teenagers in the area.