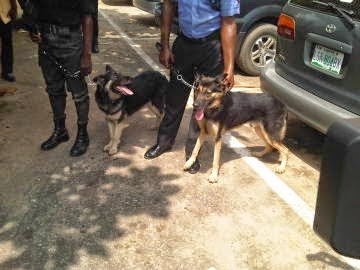 2 dangerous dogs that attacked a 4-year-old boy in Lagos recently have been arrested by Lagos State Police command.

Few days ago, 4-year-old Abraham Omonigho was attacked by the dogs that ate into his skull in Igando area of Lagos.

On Tuesday, police confirmed that the arrested dogs are still in their custody .

Little Abraham has vowed never to return home until the 2 dogs are killed but LSPC says a court could only decide whether to kill the dogs or not.

The command, which paraded the two dogs at its headquarters in Ikeja, Lagos State on Tuesday,
added that the dogs had been examined and been found to be disease-free.

“We have brought the dogs out so that the public would know that they are still in police custody. They have been examined and show no negative trait. It is only the court that will decide what happens to them. The police cannot decide to kill the dogs.” – said Lagos CP Cornelius Aderanti