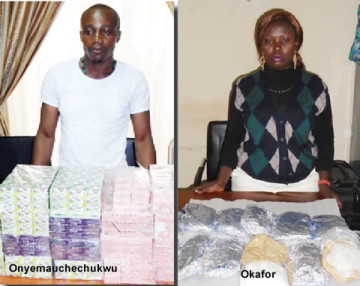 They were both arrested at the Enugu airport.

A statement by the National Drug Law Enforcement Agency said Okafor would have been paid the sum of $3,500 if she successfully made her trip to Malaysia.

She was convicted and sentenced by Justice D. V. Agishi to 10 years each in counts one and two and 20 years in count three making her sentence 40 years altogether.

Okafor reportedly hid 3.450kg of amphetamine inside the pockets of jean trousers in her luggage.

She told the court that she was broke and needed money. “I had been approached on many occasions to smuggle drugs but I declined. I thought that I could earn some quick money in few days,” she stated.

Onyemauchechukwu said he was recruited in Tanzania by a suspected drug cartel in East Africa. He told investigators that he smuggled drugs because he was stranded.

“I used to sell phone accessories before I left the country. I wanted to go to Malaysia in search of job opportunities but I was stranded in Tanzania. Then I met a Nigerian who gave me money and promised to assist me get back to Nigeria. He offered to give me some money to start up my business. He later took me to Bujumbura in Burundi where I was given 9.975kg of heroin hidden inside cosmetics,” he stated.

He said, “While this punishment is expected to correct the convicts, it will equally help to deter others from getting involved in drug trafficking. The agency commits huge resources in drug investigation, arrests and prosecution. Judgment like this will further lend credence to the nation’s anti-drug campaign.”