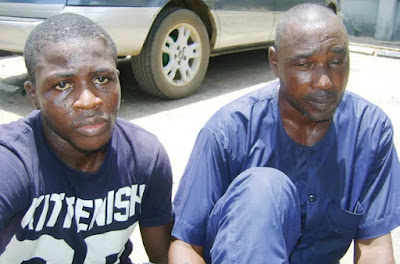 Sunday May 29, 2016 – Picture: 2 Members Of A Notorious Car Snatching Gang Arrested In Lagos

Lagos Police Command Detectives have smashed a gang that specialised in using their operational car to block victims’ vehicles on the expressway, in order to rob them. The police said it arrested just two members of the gang, while still hunting four others.

The two suspects in police net are Usman Musa, 28 and Garba. But Garba has vehemently denied being a member of the gang. He described himself as a trader, dealing in buying and selling of jewelry. According to him, he didn’t know that the jewelry he bought from Musa were stolen ones.

Before the gang was smashed, it had already snatched several vehicles. Musa confessed that they sold two of the cars, a Toyota Camry and Highlander Jeep for just N200, 000.

Continue Reading
You may also like...
Related Topics:car, notoriour, theft