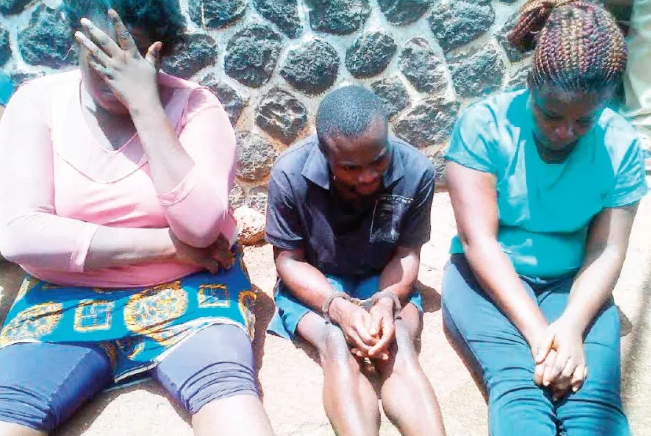 May 13, 2016 – Picture: 2 Sisters Who Kidnapped Their Mother In Enugu To Collect Money From Lagos Based Brother Arrested

Onyinyechi Achime, Akunna Achime and a male friend, Monday Egbe were yesterday paraded in Enugu for allegedly arranging the kidnap of their elderly mother in order to force her son in Lagos to release money for her treatment.

The suspect and their accomplice kidnapped their mother, Mrs Hannah Achime and used him to call their brother in Lagos to demand for N2.5 million ransom.

During back and forth negotiation, they agreed to take N500,000.

But instead of Eric Achime yielding to their demands, he told the kidnappers to eat his mother if they liked.

The suspects were caught on the second day after Eric Achime reported the number to the police.

The ailing victim has been begging the police to drop the case so her daughters could take proper care of her.