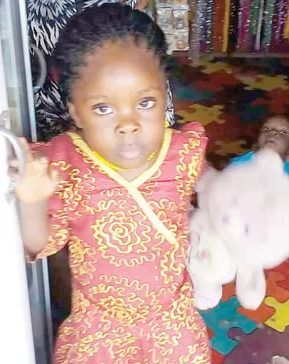 The abducted toddler, Oluwasemilore Adebiyi, was found in Abia State, where she was sold for N600,000. The girl’s mother, Mrs. Oluwatobiloba Adebiyi, was said to have allowed her daughter to go with John, who was going to buy snacks.

The girl’s mother became uncomfortable after she did not see either John or Oluwasemilore. John could not be reached on her phone as it was switched off. Since her abduction, the distraught parents were not contacted for any ransom, to suggest that their daughter could have been kidnapped for money, until the arrest of the suspect at the weekend.

Police source told our correspondent that they used John as bait to get the first buyer in Onitsha. But the suspect was said to have led the policemen to Abia State where the child was later rescued unhurt. “Grace called the woman she sold the baby to on the phone, informing her that she had another child to sell. The woman came to meet her at a bus stop, where she was arrested.

“The third buyer was also at the verge of selling the child to the forth buyer when she was rescued. So far three persons have been arrested,” the source said.

As at 5p.m. yesterday, Oluwasemilore’s elated parents were still at the Abia State Police Command perfecting papers on how to come back home with their child. Oluwasemilore’s father, Mr. Elisha Adebiyi, said his family gave God the praise and also thanked everybody who participated in the rescue of the baby.

He said: “Our daughter is hale and hearty when we saw her, only that they cut her hair. Before she was abducted, she plaited her hair. Aside that she is okay. We are grateful to FSARS and the police in general.

This feat has further reaffirmed my confidence in the police.” John resumed duty at the victim’s mother’s bead making shop at No. 1, James Oyedele Street, Moshalashi at Alagbado a week before the incident. The suspect was asked to provide a guarantor and her passport photograph for documentation but she kept giving excuses.