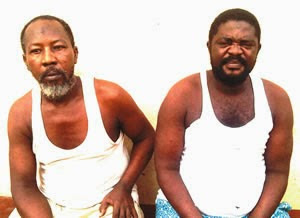 The police in Lagos have arrested an Alhaji, Ramon Adeleke, and his friend, Lukman Soyoye, for allegedly stealing a vehicle and selling it.

Our correspondent learnt that 54-year-old Adeleke and Soyoye, 38, were picked up by the CCTV in front of a hotel on Allen Avenue, Ikeja, where the theft reportedly took place.

Metro gathered that the duo, after the theft, allegedly sold the car, a Toyota Corolla, in the Ile Epo, Iyana Ipaja area for N400,000.

The matter was said to have been reported by the victim to the Area F Command, Ikeja. It was later transferred to the state Special Anti-Robbery Squad.

Our correspondent gathered that with the help of the CCTV footage, which showed the faces of the suspects, Adeleke and Soyoye were arrested on Sunday, April 19, 2015.

It was learnt that the police had recovered the stolen vehicle and the operational vehicle ─ a jeep ─ allegedly used by the duo.

Speaking with Metro, Adeleke, from Ede, Osun State, said he was about to enter the mosque for the evening prayer when the police arrested him.

He said, “I worked as a commercial driver. I was plying Obalende and Oshodi areas. I went to Mecca for pilgrimage about three years ago. I had always been a responsible man until last year. I met Lukman (Soyoye) last year and we became friends.

“In November last year, we both went to a restaurant on Allen Avenue around 7pm and we drank into the night. Around 2am, we both entered the vehicle I brought, and left. We saw the vehicle parked in front of the hotel, and everywhere was empty. So, I forced the door open and we stole it. I drove the stolen car, while Lukman drove the car we brought.

“I had even sold the car and forgotten about it. Then, in April, I went to a mosque in the Ikeja area to pray and suddenly as I alighted from my car, policemen rounded me up. I was told that it was the camera in the hotel that picked my face.”

Soyoye, an indigene of Abeokuta, Osun State, said Adeleke had lied to him that they were going to Allen Avenue to meet someone who owed him (Adeleke) some money and refused to pay back.

Soyoye, married with six children, said he was given N80,000 after the car was sold.

He said, “I am an Aluminum fabricator, and I stayed in the Ifelodun, Dopemu area of Lagos. I met Alhaji (Adeleke) sometime last year. I used to change the glass of his bus, and that was how we met. He called me on the phone that day and said one of his friends owed him and he was going to forcefully collect his money.

“We drank till that dawn. It was when he forcefully opened the vehicle that I realised that we came to steal a car. I was the one who drove the car we brought.

“I was given N80,000 after the car was sold. I did not know how he sold it. He brought it to the Dopemu underbridge. I used the money to pay my children’s school fees. It was a week after Alhaji was arrested that I was caught.”