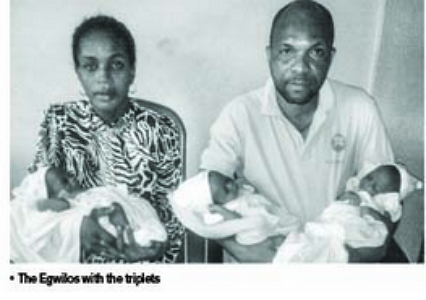 Mr. and Mrs. Malaki Egwilo are both happy and sad. They were grateful to God when He blessed them with three healthy babies in one day, but taking care of them is causing the poor couple some nagging headache.

They had two children previously and were hoping to add just one more and then say goodbye to child bearing. But fate has decided otherwise.

Their predicament was further deepened after the babies were delivered through a cesarean section. They are not only faced with the burden of raising the children; the Egwilo’s are also indebted to the hospital that took the delivery – Surgicare Consult, Ibara Estate, Ota, Ogun State.

The woman who studied Linguistics at the university, graduated in 2010. Sadly for her, she has not been able to secure a job till date. Her husband’s salary as a teacher in a small private school could hardly put food on the family’s table.

Mrs. Egwilo who hails from Ora Ukwu town in Idemili Local Government Area of Anambra, told our reporters that she felt good to give birth to triplets, but regretted that the task of taking care of them is fast turning her joy to sorrow.

The nursing mother said she never dreamt of having triplets, but most often her pregnancy scan showed that there were two babies in her womb. Therefore, in their own little way, they had hurriedly prepared for the arrival of twins but never expected that the delivery would be through caesarian section.

The 33-year-mother of five is willing to take any appointment offered to her, for the sake of her children, so that she can complement her husband’s effort to adequately take care of their five children.
Since she bagged a degree from the university, she said she has searched for jobs from one organisation to the other without any luck. She called on well meaning Nigerians to come to her aid and rescue her from her present predicament.

Her husband, Mr. Egwilo said he was dazed when he received the news of the arrival of three additional children. He said he later accepted the reality and resolved to face his new status as a father of five kids.
He said his situation now makes him understand better why some men run away when their wives are delivered of twins or triplets. The teacher stated that the responsibility of taking care of even one baby at a time was enormous.

“In those days, when I heard the news that a woman gave birth to triplets and the husband ran away, I would be angry. I would ask, why should a man run away because his wife gave birth? I now know how it feels because the demand is very high.”

The hospital alone will demand for so many things which will make the man run away or even collapse if he does not have a heart. But for me, I cannot run away because it is not my wife’s fault.

So, I can’t leave her to bear the pain alone. I am pleading with well-meaning Nigerians to assist us,” he said.