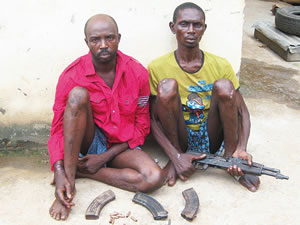 A robbery gang, which specialised in disguising as bank customers and robbing unsuspecting wealthy bank patrons, has been arrested by the Lagos State Police Command.

Our correspondent gathered that the three-man gang, which allegedly operated in the FESTAC Town area, was nabbed by operatives of the Special Anti-Robbery Squad after one of their victims reported his encounter with them to the police.

Metro learnt that two members of the gang ─ Chinedu Okeke and Kolawole Best ─ were arrested while a third member, identified only as Ben, is still at large.

Our correspondent gathered that the trio usually went to commercial banks in the area to monitor customers as they withdrew cash from cashiers or the Automated Teller Machines.

The suspects would then trail those with the highest cash withdrawal, until they could rob them without being caught.

The police explained that the gang members, who had an operational vehicle and a motorcycle to trail their victims, would demand the money at gunpoint, while customers who refused to “cooperate” would be shot.

The police said the gang, apart from pretending as bank customers and robbing people of money, also snatched and sold expensive cars in the area.

It was learnt that an AK-47 and six loaded magazines were recovered from the gang.

We learnt that during one of the gang’s operations on Friday, April 24, at about 11am, a man was attacked and a sum of N500,000 stolen from him at gunpoint.

Thirty-two-year-old Okeke from Umunze, Anambra State, told our correspondent that he was given N150,000 after the operation.

He confessed that they shot the man on the left arm when he did not want to part with the money.

He said, “We have a gang leader, Ben, who usually entered the banking halls as a customer and monitored how much each person withdrew. Kola (Best) and I would hang around in a vehicle.

“Anytime Ben found a good catch, he would call us on the phone and give a description of the customer so we could get ready to move.

“When he got to a secluded place in the Orile area, we waylaid his vehicle and asked him to hand over the money. He struggled with us and we shot him in the left arm. So, we collected the money and fled. Ben gave me N150,000, while Kola got N150,000. He took the rest.

“I was a furniture maker before I joined the robbery gang. I met Ben at a beer parlour in the Seme, Badagry area and we became friends.”

Best, 38, from Ighara, Edo State, said he had gone with the gang for four operations, adding that he had made about N500,000.

He said, “I was a dropout of a university in Lagos State. I then started hustling till my mother died. I was buying second-hand clothes from Cotonou to sell in Lagos.

“When that also failed, I joined the gang. I met Ben in the Iyana Isashi area, and we became friends. I had followed him for four operations.

“In the first operation, I was given N150,000, and N30,000 from the second. The FESTAC incident on that Friday was our fourth operation. I was arrested in my house in Badagry area after police had arrested Okeke.”

[By Olaleye Aluko, Metro Plus]