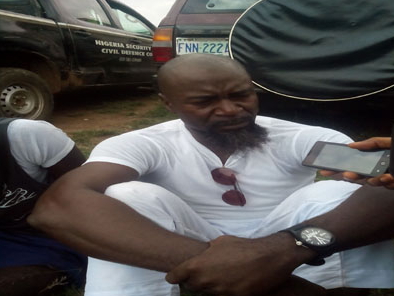 Okechukwu Omeniho, a US-based Owerri-born business man lured to Nigeria from his base in Atlanta has been rescued from the den of ritualists, gang members in Ekiti state.

The victim who resides in Atlanta was charmed and lured to Nigeria from the US under the pretext of appeasing gods of fortunes and prosperity for him.

The 49-year-old father of 3 fell for the scam and came directly to Ekiti state where he was lured into the den of the fraudsters.

The suspects took N300,000 from their victim. They were performing ritual on the suspect around 9am yesterday when officers of NSCDC rescued him.