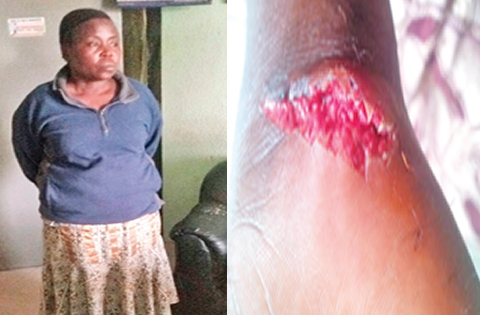 Mrs. Mfoniso Udodoikpm, a Lagos housewife has inflicted bodily injury on her teenage housemaid for breaking a plastic bowl and burning beans while cooking. The incident occurred at Meiran area of Lagos metropolis. Udodoikpm, a mother of three, is now in the custody of the police.

She was said to have assaulted the 13-year-old girl identified simply as Esther. Some residents, who heard the screams of the teenage girl, reported the incident to the police.

A man, identified as Godswill Bassey, was said to have reported the incident to the police after seeing the girl in a pool of blood, at the same time doing some domestic chores with the injured hand. Bassey rescued Esther from Udodoikpm and administered first aid on her.

The man, however, reported the matter to the police after he discovered that the woman had attacked the girl, said to be an orphan, with a saw blade which resulted in the deep cut on her hand.

“Despite noticing that the girl had sustained injury, the woman was said to have forced her to wash her clothes with the hand.

The incident was later reported to Meiran Police Station and the woman was arrested and detained at the station,” a witness said.

The state Police Public Relations Officer (PPRO), SP Dolapo Badmos, confirmed the incident. Badmos said the suspect picked the orphan from the village and brought her to Lagos to stay with her.

She said: “The girl was assaulted with a saw blade. Efforts are ongoing to partner with Lagos State government to keep the child while the suspect would be charged to court.”