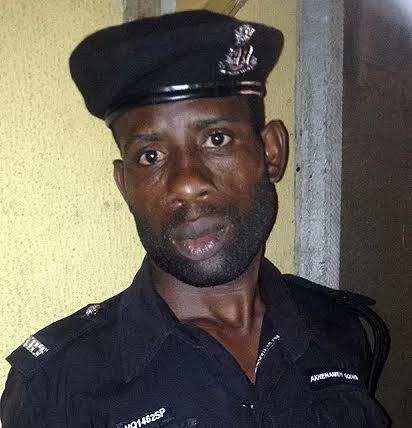 July 8, 2015 – Picture: Fake Nigerian Police Officer Arrested In Lagos For Impersonation Says He Joined The NPF By Force Bcos His Application Was Rejected

Meet 33-year-old Godwin Akhenamen, a cunning man who was arrested on the 30th of June for impersonating a police officer for good 12 years.

He was arrested while staying at a duty post wearing spy policemen uniform.

Before being caught, Godwin was attached to the X-squad department in Ikeja Lagos.

Some policemen who say him confronted him and asked him to produce his ID card but when he couldn’t do it, he was quickly arrested.

“My dream has always been to be a policeman, but I dropped out of school before I could get the desired qualification to enlist officially in the Nigeria Police Force. In 2003, I applied to join the spy police, but I was rejected.
“When all efforts to join the police failed, I arranged with a tailor to sew a police uniform for me to survive.With the uniform, I got free transport and other favours. Also, the people in my compound respect me because they think that I am a policeman.”

When asked if he knew the IG, Solomon Arase, he replied,

“Who is Arase? I don’t know him. The name sounds familiar though. I am the only one who knows that I am a fake policeman.”

Olodo police, he is not even up to date.