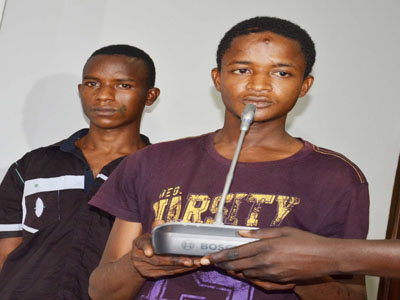 Their looks belie their dare-devilry. As they stood before reporters in Abuja yesterday when they were paraded by the Department of State Service (DSS), they cut the picture of innocence.

But standing in full public glare were two of the suspected abductors of former Secretary to the Government of the Federation and defunct Alliance for Democracy (AD) presidential candidate Chief Olu Falae.

Falae, the Olu of Ilu Abo near Akure, the Ondo State capital, was kidnapped last month from his farm in Ilado by some Fulani herdsmen, who collected ransom before releasing him four days later.

The DSS is worried about what it called the ethnic dimension his abduction has taken.

It insisted yesterday that Falae’s abduction was “a mere criminal act.”

Addressing reporters at the DSS headquarters in Abuja, an official of the agency Mr. Abdullahi Garba, described as erroneous any indication of ethnicity in Falae’s kidnap. “The Service wishes to state that the abductors are mere criminals,” he said.

The Service paraded two of the suspected kidnappers who admitted to abducting the 77-year-old High chief.

Garba said: “Investigations have further revealed that their action was not targeted at Falae as a statesman and prominent Yoruba leader; we called this news conference because some people were unduly giving ethnic colouration to this.”

Usman and Kato, who are Fulani, claimed that they only met in pursuit of making quick money and without knowing about the target chosen by the group leader.

Abdullahi, who said he left Lokoja and used his motorcycle to transport their ring-leader, Dattijo and Chief Falae who was sandwiched between them claimed that he never knew the identity of their victim.

Usman (Aka Kadiri) explained how he helped to pinpoint “a big man who goes to his farm in Toyota Hilux van” who could be kidnapped to provide Sallah and wedding funds to some of his friends.

Usman said he was approached by some of his friends in Kwara State shortly before the last Eid El-Kabir during a wedding ceremony.

Usman recalled that Datijo approached him complaining that he was so broke that he might not be able to satisfactorily celebrate the coming festival unless he (Usman) was able to give information on any big man that could be abducted for money.

“I then told him that I know one man who to brings a Hilux vehicle to his farm and I used to see him as I move my cows about”, he told reporters.

Usman said they then took Falae to Owo where he was kept at a place called ‘Pipeline’ around Benin junction.

Eventually, the ransom of N5 million was paid to Datijo, who “made away with the money”.

Elaborating further, Kato said he was the one on errand to buy the bread and Coca-Cola requested by the kidnap victim, adding that their leader, simply identified as Dattijo, who claimed that he was going to Abuja to collect the money eventually bolted away with the ransom money and switched off his mobile phone.

Mr. Garba warned that the DSS would not take kindly to any further attempt to misinterpret a criminal incident and cause people to turn against one another.

“It will be recalled that Chief Falae, a former Secretary to the Government of the Federation (SGF) was on Monday 21st September, 2015, abducted by armed men on his farm located at Ilado village, Akure, Ondo State.

“Even though he has been released by his abductors who collected the sum of five million Naira (N5m) ransom, two of the abductors were arrested by the Service on 5th October, 2015 at J. Zebra Hotel along Ganaja Road, Lokoja, Kogi State.

“The duo arrested are Abdullahi Usman (aka Kadiri) and Babawuro Kato; the Service wishes to state that the abductors were mere criminals.

“Nigerians are therefore enjoined to live peacefully with one another and shun attempts by mischief-makers to give this unfortunate incident an ethnic or any other coloration and use same to cause disaffection among the populace.

“To this effect, this Service wishes to appeal to all Nigerians to be law abiding and responsible in their commentary on sensitive issues affecting national security.

“The Service will not hesitate to deal decisively with anybody, no matter how highly placed, in accordance with the law as long as such a person(s) failed to be a respecter of the law or peacefully co-exist among the good citizens of this great nation,” Mr. Garba stated, adding that efforts are being intensified to ensure that all those involved in the criminal act are brought to justice.