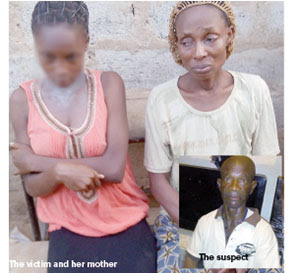 April 20, 2016 – Picture: Man Gets 13-Year-old Daughter Pregnant In Apo Abuja, Offers To Marry Her For Atonement, Says She Seduced Her

An elderly man has been arrested in Abuja for allegedly impregnating his 13-year-old daughter.

The suspect identified as 62-year-old Matthew Emeaguboro, a resident of Apo reportedly confessed to the police that he is responsible for his teenage daughter’s 4-month pregnancy.

He reportedly blamed his wife for denying him intimacy and the daughter for seducing him.

Residents of the area said the man and his daughter are long time sex partners.

The head of the family who lives in a one-bedroom apartment blamed his wife for all the evil that has happened.

Hear what he told the police:

“After bearing me two children, my wife didn’t allow me to touch her. My wife was the one that told our daughter to go ahead and bear children for me.

“I went to have my bath, but never knew my daughter’s intention. When I came out of the bathroom with a towel on my waist, she came and grabbed my waist. I tried to push her out, but she resisted. Before I knew it, the deed had been done. I know it was a temptation, but I am sorry. I beg God for forgiveness because her mother made me indulge in the act.”