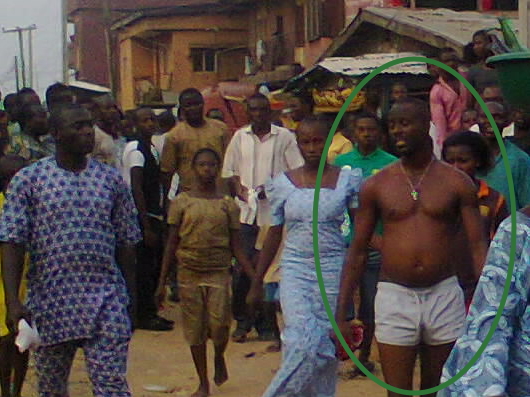 Pictured above in white boxer is Police Inspector Ibrahim Odufarasin, the leader of the Onyabo Boys in Ijora Badia area of Lagos.

He was arrested last week for allegedly opening fire on guests at a naming ceremony.

The mentally unstable inspector was released from SCID Panti Yaba on Wednesday.

On sighting him, residents of Ijora Badia fled for their dear lives.

Odufarasin was sighted with his group moving round the area in white boxer singing and dancing and announcing the return of Odufarasin and his Onyabo gang.

Although his guns and weapons had been seized, but residents are still worried he might use some of his colleagues firearms to continue the intimidation.

Can you imagine a police inspector wandering around in boxer ??

Chaiiii!!!! This oga deserves a permanent spot at Aro.