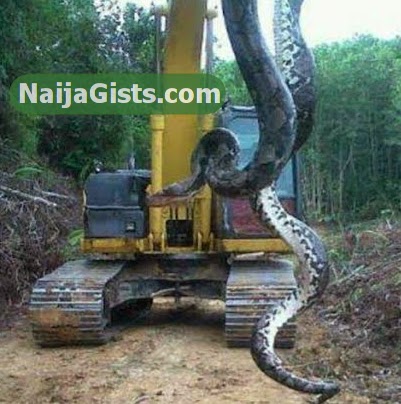 According to NaijaGists.com source in Edo state, an excavator operator at RCC Quarry in Ohsu town discovered this huge 56 foot snake.

It happened last Friday (March 7th, 2014) around 1:00am in the morning during the expansion of RCC (Reynolds Construction Company Nigeria Limited), Quarry site in the aforementioned city in Edo state.

The excavator operator was not aware that there was a giant snake hiding in a cave.

He first ran away when he discovered it, but later came back because he had already pressed it with his machine.

The snake was later sold for an undisclosed amount of money.

This is one huge snake ….OMG… Thank God the man discovered the creature on time.